Saskatchewan is a fun movie with a bit of zip. The screenplay (Gil Doud) is dull but thanks to Raoul Walsh this is a rollicking, boisterous Western - if you think films about red-coated Mounties qualify as Westerns. It was made two years after Tyrone Power had joined the Mounties in Fox’s so-so Pony Soldier. 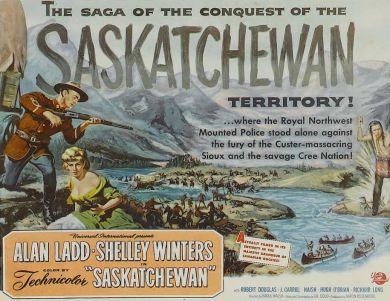 It is 1877, in Saskatchewan. Alan Ladd (Whispering Smith in red) has been brought up by the Cree and become a policeman. He does everything to prevent the Cree allying with post-Little Big Horn Sioux, who have come north into Her Majesty’s domains, wanting to wipe out as many redcoats as they had bluecoats. Ladd has his own Tonto in the shape of Jay Silverheels, his blood brother, but Jay is a bit cross at being disarmed by a mule-headed and insensitive British RCMP officer (Robert Benton) and so he sides with Crazy Horse and Sitting Bull. 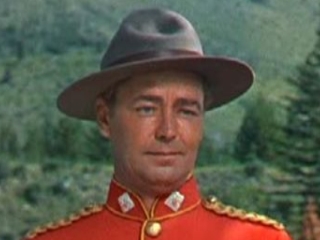 In a Bountyesque episode, Ladd mutinies against Benton and leads the party bravely to safety. In the group is Shelley Winters, a large saloon gal, who is distinctly out of place. She is accompanied by an Earpish US marshal (in fact it’s Hugh O’Brian so no wonder he looks Earpish) who is taking Shelley back to Montana to stand trial for murder, though really he is in love with her. Of course Canadian Mounties were OK to Hollywood if an American lawman came north of the border to arrest someone. That had been proved by Gary Cooper in North West Mounted Police in 1940. Shelley always had substantial Browningesque curves and was no sylph but in this movie she wasn’t yet actually fat. However, large or small, she was always poor in Westerns. 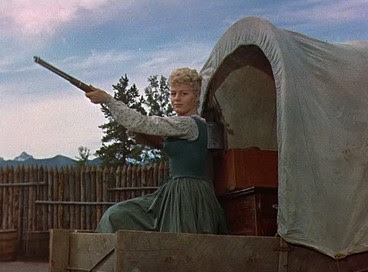 The party is made more colorful by the addition of a buckskin-clad French scout, Batouche (J Carrol Naish), who is amusing. There’s also a cheery ‘Irishman’ whose accent sounds suspiciously like Chicago, in the shape of Richard Long.


The Banff scenery is truly spectacular, photographed dramatically in Technicolor by John Seitz. It could have been Switzerland. It’s actually Bow Lake and Peyto Lake in the Banff National Park, and quite stunningly beautiful. The music (Henry Mancini et al) is overwrought but quite suitable and Walsh-ish. 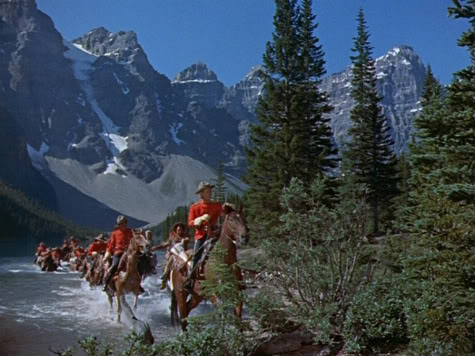 There is loads of action as the Sioux attack a lot. There’s a high-speed canoe chase, obviously the prototype for Bullitt or The French Connection (not). It’s really a straightforward cavalry Western that just happens to be set in Canada and the soldiers have red uniforms instead of blue. Ladd isn’t very good (he never was as a Western action man) and the part cried out for Errol Flynn but I suppose the female fans were happy either way. 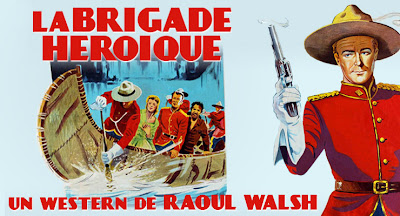 Of course lerve blooms once the jealous Marshal O’Brian is disposed of. The Mountie always gets his person, after all.