The last Westerns of Alan Ladd

By 1960 Alan Ladd was not in a good place. He was suffering from depression and was drinking too much. He looked puffy-faced (had he had a facelift?) and even unsteady on his feet, taking funny little steps as he waddled along. He had been producing movies more than starring in them. In his last four films, two of which were Westerns, he didn’t look well at all. 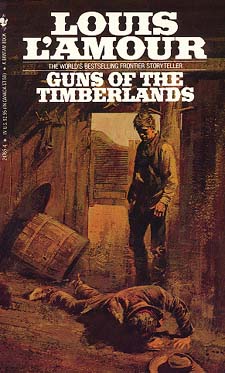 The Westerns were pretty forgettable B-movies really. The first, Guns of the Timberland, was an Aaron Spelling/Joseph Petracca treatment of the Louis L’Amour novel Guns of the Timberlands. L’Amour, a fine Western writer, was on the set some of the time. Spelling had done a few Westerns but was to be known mostly for TV work, while Petracca had worked with Ladd on Proud Rebel in ’58 (though not much else). The story, as shown in the film, anyway, is pretty standard stuff with few surprises. Farmers don’t want the trees felled, lumberjacks do. Ladd is the chief lumberman and good old Gilbert Roland is his partner. 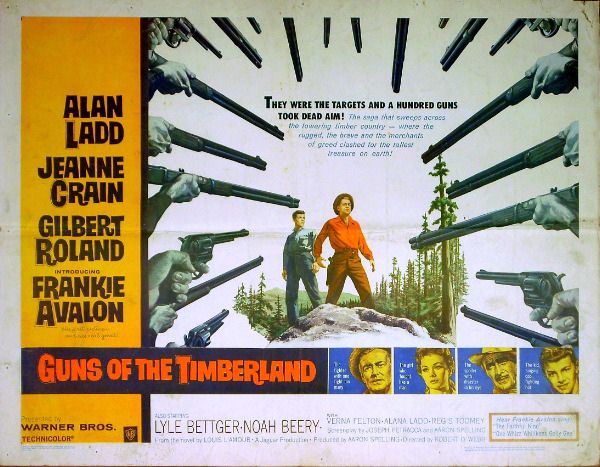 Frankie Avalon is in it – it was the era when teen-idol singers were de rigueur in Westerns. Ladd’s daughter Alana also appears. Luckily we have Noah Beery Jr. to look forward to. There are certain names which, when they appear in the opening credits, lift your spirits. Oh good, you say. Noah’s was one of those. 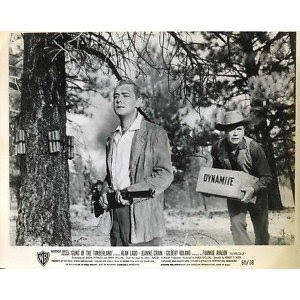 All in all, though, the acting is a bit ordinary. Once again, the strength of an Alan Ladd Western comes from the look of the thing. A lot of this was down to John F Seitz, who, working with various directors, photographed no fewer than five Westerns with Ladd. He had started on Western silents in 1916 (The Quagmire) and in ‘modern’ times did a solid job with George Marshall in the Charlton Heston vehicle The Savage. Not perhaps one of the great Western photographers, he nevertheless made the California and Arizona locations of Timberland look very attractive. And if you’ve got a picture about logging and forests, you need that. Other Ladd Westerns were also very well photographed: Loyal Griggs’s Oscar-winning work in Shane comes first to mind but there was also Ray Rennahan shooting Whispering Smith, Charles Lang doing Branded and Red Mountain and Ted McCord on Proud Rebel. These were all visually attractive pictures with the wide open outdoors figuring prominently (although all also with a lot of sound-stage in-studio talky bits, but all Westerns suffered from that). 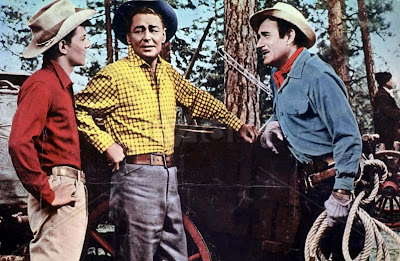 Of course you can have very good Westerns set statically, claustrophobically in towns, with tension building. High Noon, The Gunfighter, 3:10 to Yuma (the 1957 one) and many others did this very successfully. But somehow real Westerns, the ‘proper’ Fordian ones, Anthony Mann oaters also, need sweeping vistas, buttes and crags, deserts and cactus, dramatic scenery to highlight the outdoors drama of the frontier story.
***


Later the same year (1960) Ladd’s last Western, One Foot in Hell, came out. I watched the DVD again the other day. It really was a wretched end to any career.


Directed by James B Clark, a former film editor who did a lot of directing of TV shows, it lacks pace and tension and is lackluster to say the least. Written by Aaron Spelling and Sydney Boehm (who had worked on Branded and also The Savage), it wasn’t a bad premise: a stranger arrives in town with an ill and pregnant wife, he is greeted only with churlishness and unhelpfulness, and his wife dies. The penitent townsfolk, decent really, try to make amends and offer the stranger a job as deputy sheriff, which he accepts. To settle down and forget? Not on your life. He has other plans in mind.

Recruiting a gang of ne’er-do-wells (renegade English aristo Dan O’Herlihy, ruthless gunny Barry Coe, drunken explosives expert Don Murray and of course dead-end saloon gal Julie Reynolds to be his ‘respectable wife’), he puts together a revenge plan to pay back the town for what it has done… 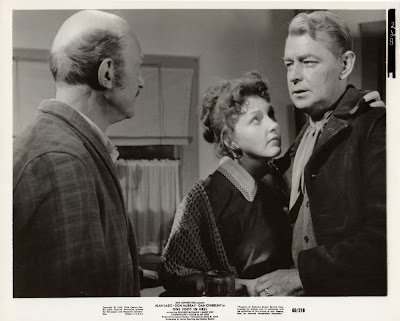 But a good story alone doesn’t make a good Western. It needs pacy, tight direction, good acting, tension and action. As lead, Ladd was in a sorry state, often just saying the lines and that only barely. Don Murray is about the best otherwise; he could be OK in Westerns (I like From Hell to Texas anyway). The others are cardboard cut-outs, not real characters at all.


The movie drags and is too slow. Most of it is town-bound, so no opportunity for photographer William C Mellor to do much (we’re a long way from The Naked Spur), so even the saving grace that most Alan Ladd Westerns had, namely that they looked so good, doesn’t apply here. 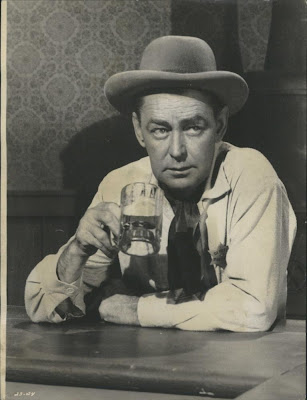 The interesting part is watching how the solid, decent stranger at the start of the film descends into psychotic obsession, but unfortunately by this time Ladd simply wasn’t up to it.


Don’t get me wrong: One Foot in Hell is a perfectly acceptable B-Western and I’ve seen worse, a lot worse. But if you’re looking for another Shane, you’re going to be disappointed, and how.

You could argue that once Alan Ladd left Paramount (i.e. the last seven of his thirteen Westerns), he never again made a decent cowboy picture.


Or you could even argue that he was never cut out for Westerns in the first place.


I tend to the latter argument, I’m afraid.


Ladd died of an acute overdose of "alcohol and three other drugs", aged only 50, in 1964. He had been famous as a Western star, chiefly because of Shane. You do get the feeling, however, that any big studio star in the 1950s had to do Westerns and maybe Ladd wanted to, maybe he liked them - but he was better in other genres. 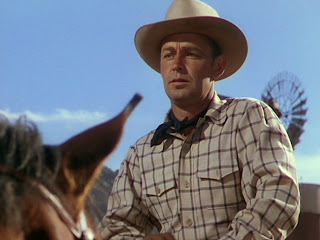