Now it's the turn of the Dalton Brothers to be glamorous outlaws. A classic, straight-down-the-line early 40s black & white Western, the kind the big studios were churning out and the punters were waiting in line outside movie theatres to see, this is a rollicking actioner, good-humored and full of fun. It is a credit to the genre. Directed by George Marshall, who certainly knew what makes a fun Western (he’d done Destry Rides Again the year before), this gallops along at a cracking pace. If you want a truly excellent treatment of the Dalton story, read The Desperadoes by Ron Hansen but if you don't care about historical fact and want a zippy Western movie with vim and fire, watch this.

Unlike early portrayals of the Jesse James gang, which outrageously made ‘this is how it really happened’-type claims, this one at least has the good grace to tell us in the opening titles that fact and fiction have been blended. They sure have. The story was “based on” (with many liberties) Emmett Dalton’s book of the same title but Emmett had died three years earlier and Universal were free to take liberties that they could not have taken had he been on the set. Universal had the ‘Dalton franchise' in the same way that Fox had the James brothers one.
Naturally, the Daltons were driven to crime by the evil land-grabbers. It was all the banks’ and railroads’ fault. The decent Dalton boys are unjustly blamed for every bank and train robbery in the West but they are of course innocent of them. Their sweet, dear old Ma’s house is burned down by the railroad company (shades of Jesse James movies again) and so they are justified in holding up trains. You know.
The film starts with grandiloquent and rather pretentious commentary and out-of-place scenes (nevertheless finely photographed, by Hal Mohr) of ‘civilization’ moving West. I'm not quite sure how relevant Manifest Destiny themes are to the tale of a gang of lowlife robbers. There are then lots of studio sets and back projection, which is disappointing after the epic opening shots of the West, and the music by Frank Skinner is melodramatic and dated.
The casting of the brothers is definitely a disappointment. Broderick Crawford as Bob was overweight even then (Easterner Crawford liked Westerns and did quite a few of them but he never really convinced). Still, he is a tough, gritty leader and does bring energy, to be fair. Brian Donlevy is very poor as Grat, though, the big, dumb one. He really should have stuck to Destry-type crooked saloon-owner roles. And Stuart Erwin as Ben (it’s not quite clear why they needed to invent a bandit; Ben was the first born Dalton but never part of the gang) and Frank Albertson as Emmett are pale. The Daltons all wear their gunbelts with the buckle at the back, so that's one good thing. They all die when raiding the (one) Coffeyville bank and Emmett does not survive to write the book on which the film is based. As he was dead, they could kill him off, I guess. 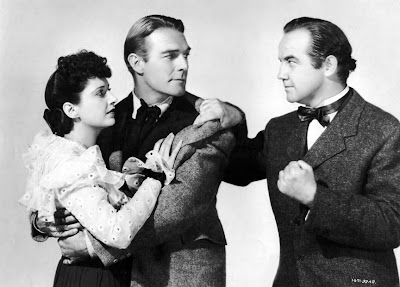 Grrr. Hands off my gal.
They have invented a leading role for Randolph Scott. He is not a Dalton but the lawyer friend of the family, rather as he was lawman friend of the James boys in Fox’s Jesse James the year before, and the love interest is provided by Bob’s girl Kay Francis, who duly falls for Randy, causing ructions. Randolph was cornering the market in stealing famous bandits’ girls.
Mary Gordon as Ma Dalton is desperately over the top. Why will these actors attempt cod accents, so bad you don’t know if it’s supposed to be Scots or Irish? Harvey Stephens and George Bancroft are satisfactorily slimy lawyers and speculators.
Andy Devine is amusing (as ever) as the brothers’ pal Ozarch Jones in that overacting way of his. He was a dreadful ham but, how can I put this, he overacted well. Ozarch is surprisingly successful as a Lothario with women falling at his feet. Andy had been a hit in Stagecoach and was one of the few actors who could genuinely handle a six-up, and he gets the chance to drive a six-horse stagecoach here, rescuing the brothers from a siege. He is rewarded with a lemon pie but in a moment of deep pathos and tragedy, the pie is lost. 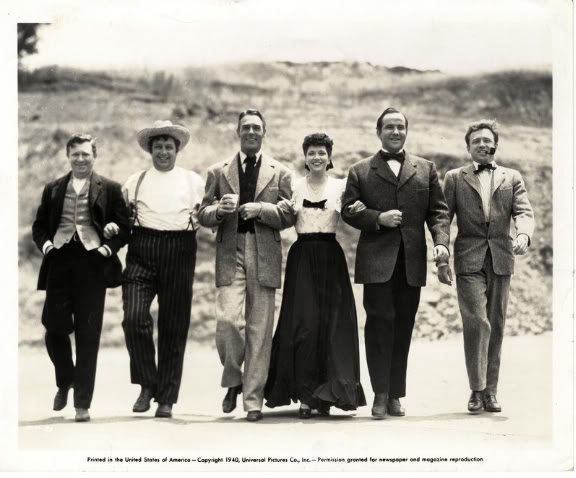 The stunts are remarkable, if probably cruel. ‘Crawford’ goes under the stage (again like Stagecoach) and leaps onto a train, and there is the never-repeated Canutt stunt of jumping horses off a moving railroad car.
The great thing about When the Daltons Rode is its energy. It has no pretensions to art or history. It’s just a whole lotta fun. It’s a must-see! 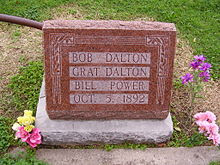