Westerns loved the title The Man from… One thinks of the man from Laramie, of course, but there were also men from Bitter Ridge, Dakota, Del Rio, Galveston, Guntown, Hell's River, Salinas, Snowy River, Texas, Utah, loads more, even from God’s Country.


Maybe after a couple of rather less than stunning Westerns, Glenn Ford wanted to recapture the magic of The Man from Colorado of 1948. 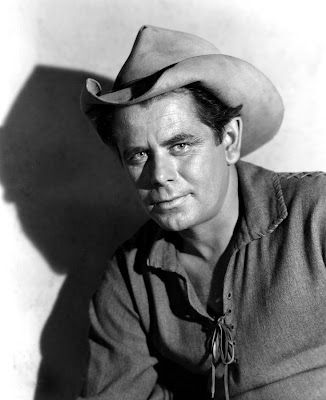 
This one is too early to be a 'proper' Western by some purists’ standards but actually, although it’s supposedly set in the 1830s, it’s a real Western alright. Johnny Stroud (Ford) is branded a coward for having being chosen by lot to ride out of the Alamo before the massacre to protect the families of the besieged men. He is too late and so embarks on a voyage of vengeance to kill the leader of the guerrilla band, Jess Wade (good outlaw name), played by perennial villain Victor Jory, who burned his farm and killed his family. These marauders dress up as Mexicans and what could be sneakier than that? 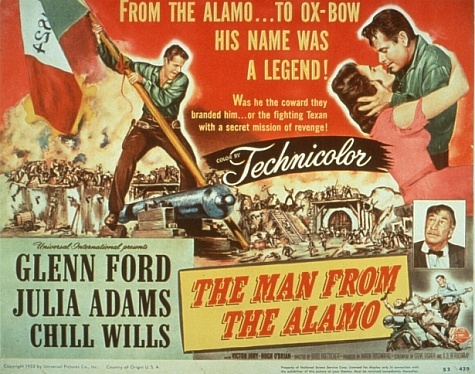 Dramatic stuff
He is aided by a young Mexican boy (Marc Cavell), who knows Glenn is no coward (as if) and by Beth Anders (beautiful Julia Adams), who comes round to that view. Chill Wills, splendid as a one-armed town elder John Gage, also comes to see Glenn as heroic but only at the very end. 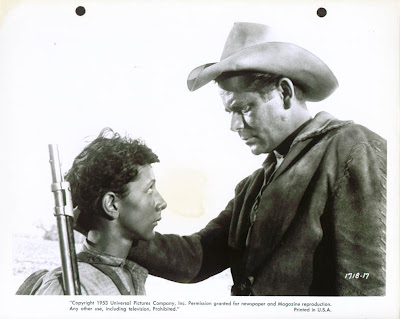 At least someone believes Glenn isn't a coward
Branded a deserter and coward, he finds himself in a cell awaiting hanging with, as luck would have it, a member of the gang of bandits. If they can escape together and Glenn can infiltrate the gang... 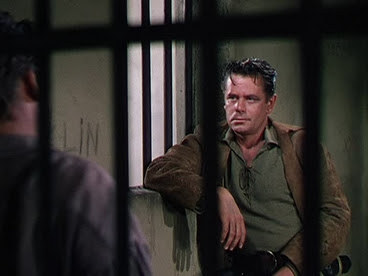 Now's my chance
Ford was an outstanding Western hero. He was handsome, rode well (always on high grade horseflesh) and did an excellent line in the strong, silent, often misunderstood type. Above all he underplayed it, in an almost Gary Cooperish way. The role he had in this movie suited him to a T.

Budd Boetticher left to others the grand themes of Western history. He wasn't interested in the Alamo so much as the story of one man. Think of those excellent movies he made with Randolph Scott: they aren't about great themes, conquering the west or crossing the continent; they are about how one man deals with adversity courageously. 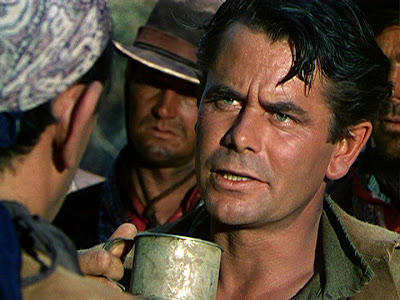 I'm not going to justify myself. You believe what you want.


Produced by Aaron Rosenberg for Universal (we think of those Anthony Mann Westerns...), directed by Boetticher, written by Steve Fisher and DD Beauchamp the Great from a Niven Busch story, photographed by Russell Metty and with music by Frank Skinner, this early 50s Western really had all the right ingredients. There’s action and plenty of shootin’. The Alamo scenes are quite impressive and Travis and Bowie look suitably beat up and dirty (nothing like Harvey or Widmark seven years later in the plodding Wayne Alamo). 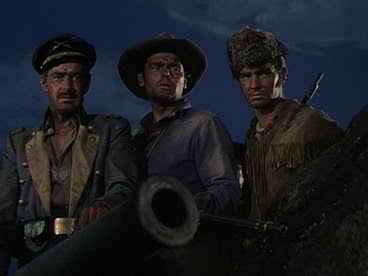 Proper Alamo defenders. Ragged and dirty.
The ending is as expected but none the less heartening for that. Some of the dialogue is a bit corny, it’s true, and you always wonder in these cases why the hero doesn’t simply explain the situation and get the people on his side. But no, he has to go his lonesome way with jaw set and upper lip stiff, gritty in the knowledge that he is right and must stand above the base taunts and rumors, even if they get him lynched. No true Western hero will stoop to justifying himself. 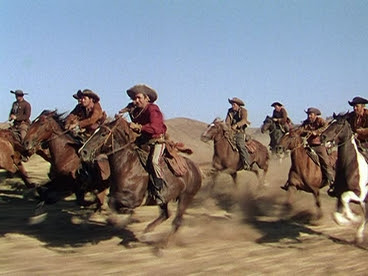 
1953 was a pretty hot year for Westerns, what with Shane, Hondo and The Naked Spur coming out, not to mention Escape from Fort Bravo, The Stranger Wore a Gun, Gun Fury and Ride, Vaquero!, to name but a few. There were 299 in all that year (including TV), if you can believe it. So The Man from the Alamo had stiff competition. It held up well. 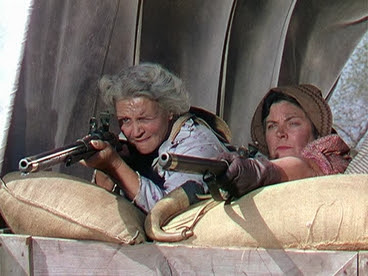 Mine's the bandit on the right, Annie


But it is a good little Western, well worth its Jeff Arnold three-revolver rating and a DVD purchase. With Glenn and Chill, and Boetticher giving the orders, you can’t go far wrong.