The Daltons in fact and fiction 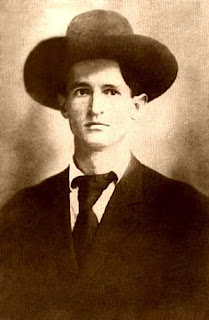 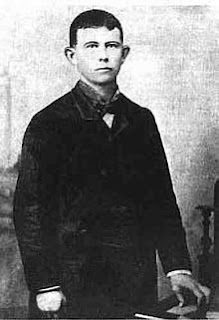 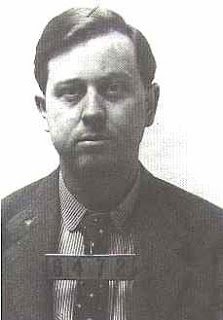 
The Daltons are famous outlaws of the old West, and while they have never attracted quite the same cinematic or novelistic attention as Jesse James and the Youngers or Billy the Kid, nevertheless there are many movies and books about them, factual and less so.


In the early days of Hollywood, Emmett Dalton, the youngest of the brood and survivor of the Coffeyville shoot-out, produced silent movies such as Beyond the Law (1918) which he wrote and in which he appeared as himself, Bob and Frank. He also toured the lecture circuit. 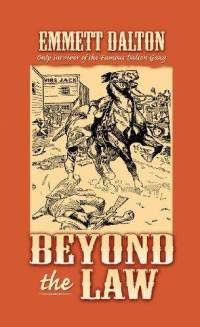 
Later, there were many low-budget and kids’ westerns featuring the Daltons in some way, such as The Dalton Gang in 1945, a pretty poor movie starring Don 'Red' Barry as a marshal chasing a certain 'Blackie' Dalton, or the 1954 Jesse James vs. the Daltons, which we have already reviewed.


The best of these movies was probably The Daltons Ride Again (Universal, 1945) which at least featured real Daltons Bob (Kent Taylor), Grat (Lon Chaney) and Emmett (Alan Curtis), as well as another brother, the eldest, Ben (Noah Beery Jr.) who in historical fact took no part in the other Daltons’ criminal activities. In this picture, one of their dad’s friends has been murdered by land-grabbers, so they rob the bank owned by the crooks. It resembles the facts in only the very vaguest way. 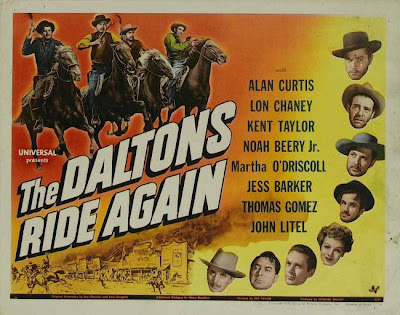 Several of these movies concentrated on the women involved for some reason, such as The Daltons’ Women (1950), a Lash La Rue vehicle also starring Fuzzy Knight, or The Dalton Girls (1957) about Holly, Rose, Columbine and Marigold Dalton, whoever they might be. 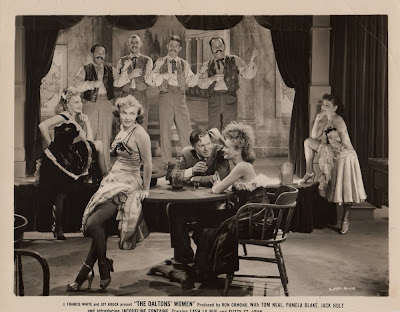 There was a film named The Dalton That Got Away in 1960 but I know nothing about it and have never seen it. It was apparently written and directed by Jaime Salvador and starred Mike Connors as “Russ Dalton” (???)


TV got into the act too of course. There was an episode of Tales of Wells Fargo about the Daltons as well as a Death Valley Days and a Stories of the Century one. Various documentaries on the Daltons have also naturally appeared on TV such as a 1957 episode of the CBS series You Are There which was entitled The End of the Dalton Gang (October 5, 1892) and in 2003 The Dalton Gang Raid in the Investigating History series.


And let’s not forget that the Daltons are key figures of the whole Lucky Luke franchise, whether in the bandes dessinées or the cartoon movies and TV shows. I especially like Les Dalton se rachètent (The Daltons Redeem Themselves), Lucky Luke Adventure No. 36, Paris, 1971, a deep, philosophical and moving tale of redemption (hem hem). 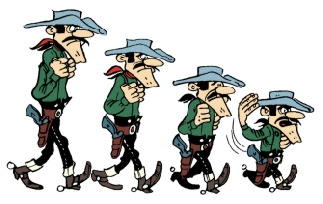 As you doubtless know, Morris & Goscinny also invent a brother, not Ben this time but Averell. The tall one. Why 'Averell', heaven knows. Or maybe you do.


Bill Dalton is played by Scott Glenn in Cattle Annie and Little Britches (1981), a semi-comic romp about the Doolin gang with Burt Lancaster as Bill Doolin and Rod Steiger overacting (as he usually did) as Bill Tilghman (at least the great Bill Tilghman gets to appear in a Western; he seems to have been largely written out of the story of the West). But of 'big' films about Bob, Grat and Emmett and the Coffeyville raid, we only really have When the Daltons Rode (Universal, 1940) directed by George Marshall (of Destry fame) and a later made-for-TV movie, The Last Ride of the Dalton Gang (NBC, 1979), the best of the bunch. More on those: click the links. 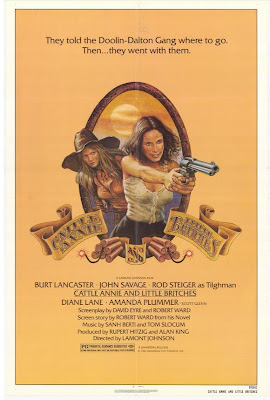 
As for the books, the leading contender as far as novels are concerned is the first work of the excellent Ron Hansen: Desperadoes (Alfred A Knopf, 1979). I love this book and read it again recently. Firstly, it is very well written (like his later Jesse James book) and is narratively gripping, lyrical and at times almost spiritual. Secondly, you just get the feeling reading that it is authentic. I just take it on trust as historically accurate somehow. 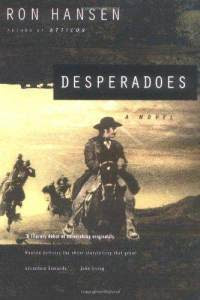 It starts with Emmett Dalton in California and is in the form of fictional reminiscences. Hansen manages the rare trick of turning what were, honestly, pretty lowlife and unappealing hoodlums into almost sympathetic characters. He eschews the lurid Robin Hood kind of treatment and there are no lame excuses of the ‘the railroad drove us off our land and we had to fight back’ kind. At the same time we see the brothers drifting into crime almost inescapably.


If you want to be entertained and informed, you would do a lot worse than start here. You get the Daltons in fiction and fact.


There seems to be a series of ‘Dalton Gang’ novels by a certain Alison Kent with hunky, shirtless men on the covers. I haven’t read them but the synopses talk about the Dalton farm in Crow Hill, Texas and I don’t think they can be our Daltons.


There’s a 2011 novel In the Shadow of Death Alley: a novel of Emmett Dalton by Rebecca Rockwell which is about our Daltons. The amazon blurb says:
“Of all the outlaw gangs of the Old West, perhaps none was more notorious or feared than the Dalton Gang. Known for their daring attempt to rob two banks at once in broad daylight, the gang was wiped out on that day when the townspeople of Coffeyville Kansas took up arms against them. All of them were killed--except for one, young Emmett Dalton, only 21 years old. Based on historical fact, this novel tells the story of the gang and its legacy through Emmett's eyes.”
But I haven’t read it and can’t tell you whether it’s good, bad or indifferent.


There were persistent rumors about a sixth bandit at Coffeyville, who got away. Doolin, maybe, or Bill Dalton. There are other candidates. The 1991 Max McCoy novel The Sixth Rider tells the story from the point of view of this possible sixth member of the gang.


There are of course many more (or less) historical, factual accounts of the gang. Emmett himself wrote an autobiography When the Daltons Rode (1931) as well as Beyond the Law (1918), the latter being more of a novel really. 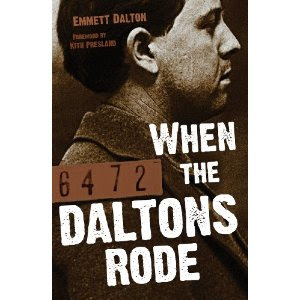 
So there’s no shortage of reading matter if you want to explore. And of course the websites: Wikipedia, naturally, always a good starting place, and an article on the Coffeyville raid on HistoryNet (external link). The online Encyclopedia of Oklahoma History and Culture has a short article (also external) by Nancy B Samuelson and the Legends of America site (ditto) is good on the Daltons, worth a look.


So there you go, an introduction to the Daltons in fact and fiction.