Lust for Gold, Glenn Ford’s fifth oater, is a Western sandwich. It starts and ends with modern times, for nearly half the film’s length, as fortune-hunter Barry Storm (William Prince, energetic, naïf) searches the Superstition Mountains in Arizona, looking for the Lost Dutchman Mine, named after his grandfather, immigrant Jacob Walz, who is said to have found Spanish riches there. Researcher Floyd Buckley (Hayden Rorke) is killed in the mountains and suspicion falls on Storm. The local sheriff (Paul Ford, in his first Western) orders deputies Covin (Will Geer, excellently sinister) and Walter (Jay Silverheels, solid as always) to accompany Storm back into the mountain, to retrace his steps. 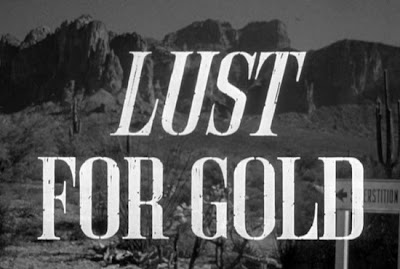 The gold-lust is well described


In the long flashback to the original events, Walz (Glenn Ford), a German whom people assume to be Dutch (Dutch/Deutsch, a common confusion in the West), accompanied by old Wiser (Ford's pal Edgar Buchanan again, absolutely outstanding), follows Ramon (Antonio Moreno) and partner Ludi (Arthur Hunnicutt) into the mountains, and Walz shoots them all dead with his Sharps, even his partner Edgar, when the treasure is found, to claim the gold. Shades of Treasure of the Sierra Madre then. 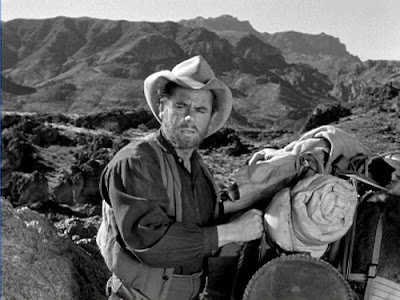 Murderous and reprehensible, yet you kinda back him


Walz returns to town (there's a great scene showing how rumors and false information spread) but understandably won’t file a claim because he will have to reveal where the gold is. Yet he is entrapped by crafty Julia Thomas (a brilliant Ida Lupino) pretending to be all sweet and innocent (and unmarried) but really, of course, after his money like everyone else. She finally receives a crushing response.


Glenn Ford pulls off the trick of being reprehensible as the murderous Walz, even teetering on the edge of madness (he had also gone insane the year before in The Man from Colorado), yet being at the same time curiously sympathetic. He is embattled, attacked on all sides and you can’t help feeling sorry for him despite his actions. He makes a good fist of the slightly German accent and he looks quite Bret Maverickish when dressed up, clean and courting Ida. It’s a truly great performance by Ford.


At the end we go back to the modern murder mystery to resolve the case of the dead Buckley. 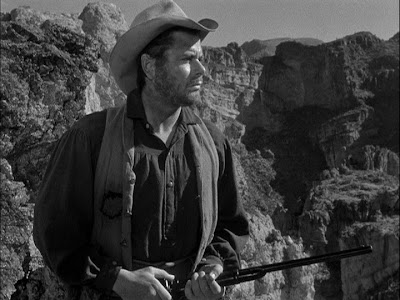 
So we have a short nineteenth century Western bracketed by a modern thriller. The story, adapted by Ted Sherdeman and Richard English from the real Barry Storm's book, is interesting and unusual. Like Sierra Madre, it’s a tight thriller about the corrupting power of greed.


It was directed by S Sylvan Simon, who only did three Westerns, this one, Bad Bascomb and The Kid from Texas. It is said that George Marshall did some of the directing uncredited. Photographed in black & white by the great Archie Stout in the Superstition Mountains, the film’s noirish qualities are intensified.

Lust for Gold really is an excellent movie and Glenn Ford is outstanding in it. So is (top-billed) Ida Lupino.


And by the way, the mine still hasn’t been discovered, if you’re interested. The voiceover tells us we all have the right to seek the gold and stake a claim if we find it. But beware of Ida. 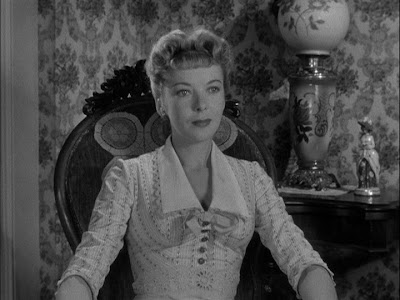 Femme very fatale
Posted by Jeff Arnold's West at 9:17 AM