"As for Winchester '73, that was one of my biggest successes. And it's also my favorite Western. The gun which passes from hand to hand allowed me to embrace a whole epoch, a whole atmosphere. I really believe that it contains all the ingredients of the Western and that it summarizes them." 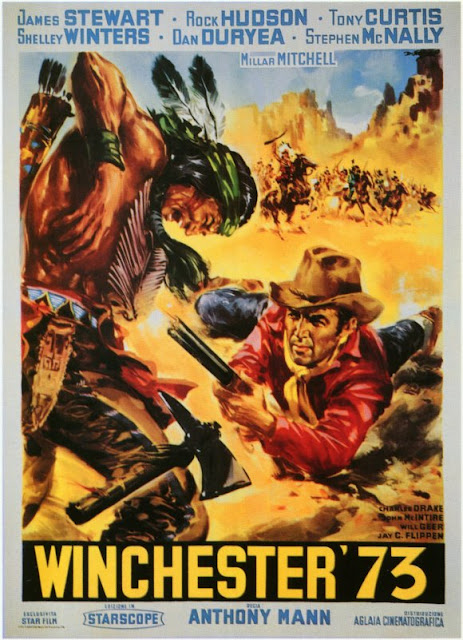 By 1950, with My Darling Clementine, Red River and John Ford’s cavalry trilogy having established Westerns as serious, big-budget adult drama, we were ready for some hard, well-acted and thought-provoking pictures. Winchester ’73 was one of these. It was the third of Anthony Mann 's Westerns to be made, in fact, but the first to be released, and the first of a long series in which Mann directed James Stewart for Universal. Mann (standing in at Stewart’s behest for the scheduled but unavailable Fritz Lang) proved to be one of the greatest Western directors and Stewart one of the genre’s finest stars. It was a stunning combination.


Perhaps as a reply to Warners’ Colt .45, the other gun-biopic movie of 1950 (a much weaker and more juvenile affair), in Winchester ’73 the cowboy doesn’t love his horse or his gal; he loves his gun. Shelley Winters, the female lead, said: “Here you’ve got all these men – Stewart, Duryea, Hudson, McNally, Drake, the rest of them – all running around to get their hands on this goddam rifle instead of going after a beautiful blonde like me. What does that tell you about the values of that picture? If I hadn’t been in it, would anyone have noticed?” Quite, Shelley, but you have to understand, it’s a boy thing.

Furthermore, it wasn’t just “a goddam rifle”; it was a Winchester ’73! There were only 133 One-of-a-Thousand Model 1873s made. Good grief, woman. Anyway, Ms. Winters, you were only in eight Western movies and to be brutally frank were fairly hopeless in all of them. So there. (That's telling her). 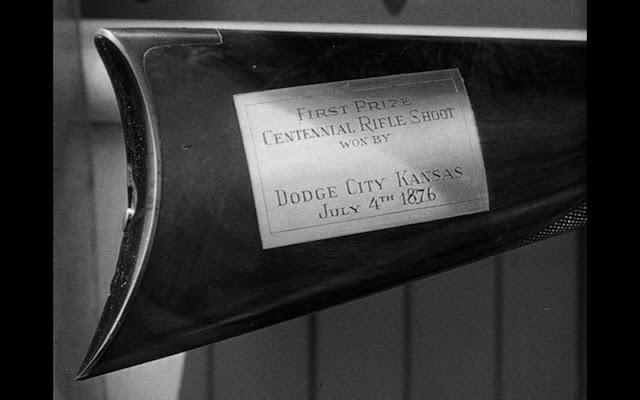 Maybe Hondo Lane's name would appear there
Jimmy wins the gun in a display of marksmanship on that signal day, July 4th, 1876. They had a real marksman, Herb Parsons of Winchester’s, off-camera amazingly actually hitting the tossed coins. No special FX in those days. 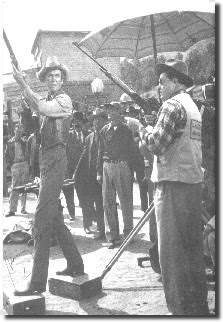 You can see the rifle, with the names of the actors engraved on the stock (“Jimmie Stewart”), at the Cody Historical Center in Wyoming. I’d mortgage my grandmother's soul for it. 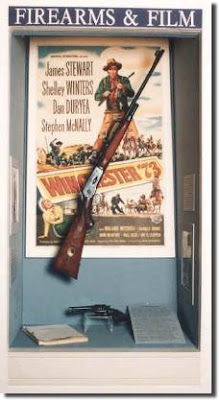 But in the movie it is then stolen from him by the evil Dutch Henry Brown (Stephen McNally) and passes, as Mann said, from hand to hand, including that of John McIntire, coolly and sinisterly excellent as gambler-gun merchant, and Rock Hudson in one of his first parts, as earnest and beefy Indian chief. 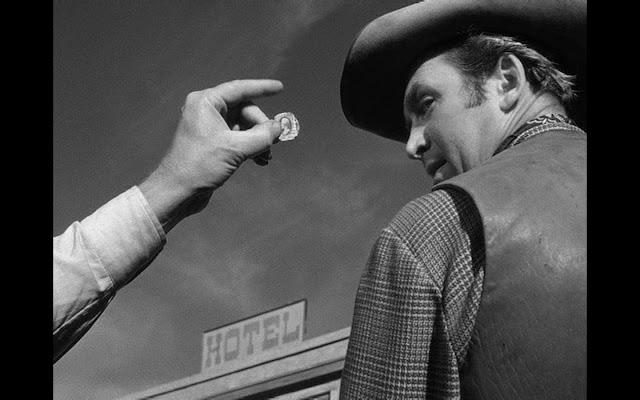 Hit that
Dan Duryea is a bit clownish as Waco Johnny Dean the badman but you can’t help liking him. He starred in the Stewart part in a 1967 remake of this movie.

There are no love scenes between Shelley and Jimmy. She said it was because they both had good left sides… In fact, after the first two Westerns he made, Anthony Mann tended to relegate women to secondary roles. He thought Westerns were a man thing. Women were often there to be helpless and rescued by the macho male.

The excellent Millard Mitchell plays Stewart’s steady sidekick High-Spade (he returned to the Mann/Stewart team three years later in The Naked Spur.) Anthony Curtis has an early bit part as a soldier, as does Jay C Flippen as the Army sergeant. Will Geer, though miscast, has fun doing a burlesque Wyatt Earp (as Stewart himself was to do 15 years later for John Ford in Cheyenne Autumn). 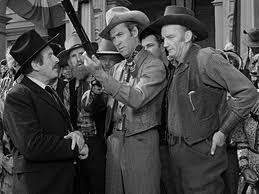 Left to right: Geer, beard, Winchester, Stewart, Mitchell
At one point Dutch Henry Brown lays down a hand of aces over eights, so most true Western fans will have an idea of what’s going to be his fate. It was of course (I don’t need to tell you) the hand Wild Bill Hickok had when, only days after July 4th, ’76, he was gunned down by the creep Jack McCall. This is what we sad buffs call Western lore.


And by the way, talking of Western lore, Henry Brown was also the name of a real-life Kansas outlaw. His criminal career started in New Mexico during the Lincoln County War and he later moved to Caldwell, Kansas, becoming town marshal. For his services to the community, Brown was presented by the citizens with a Winchester rifle with his name inscribed on a plaque on the stock. Coincidence, huh. (The story doesn’t end too happily – or intelligently - though because he was later caught robbing a bank in Medicine Lodge, Kansas, with the rifle bearing his name. Doh.) 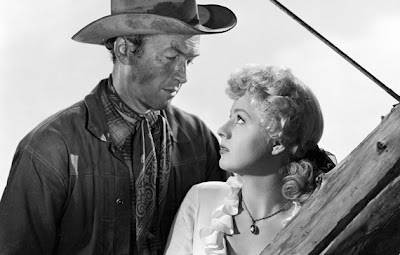 You don't get it, Shelley
As in the great Mann Westerns to come, Stewart is a man with a secret, a man with a past, a man with a hint of bad about him. Later heroes were bounty hunters, ex-guerrillas, former outlaws. They are not so far from the villains they pursue.

There is good black & white Mescal and Old Tucson, Arizona scenery (William Daniels at the camera) which gives a classic Western feel to the movie, especially for the final shoot-out. And there’s a tight Borden Chase screenplay which made the rifle the central character as it passed from hand to hand. “Talking is alright but in a Western the story is told visually.” (Stewart).

The only weakness may be the final shoot-out: the whole picture has shown Stewart to be the good guy and McNally the impossibly bad badman. But plausibility slips away when they fight an endless rifle duel in the rocks and Stewart becomes the psychotic (Mann ‘did’ psychotic) who is really no different from his brother. But I only said that to show I can criticize. I am a critic, you know. Even if I can’t say things like, “Mann bends horizons with tight yet volatile spatial arrangements.” I would say them if I knew what they meant because they sound awfully grown up. But you’ll have to read another blog for that kind of thing, I'm afraid. An intellectual one.


What I will say is this: Winchester ’73 and Broken Arrow the same year made Stewart a Western tough-guy hero. He’d only done Destry before. Audiences were surpised, even shocked. But it was a deliberate attempt by Stewart to break away from the amiable, amusing nice-guy image for a change. It worked. 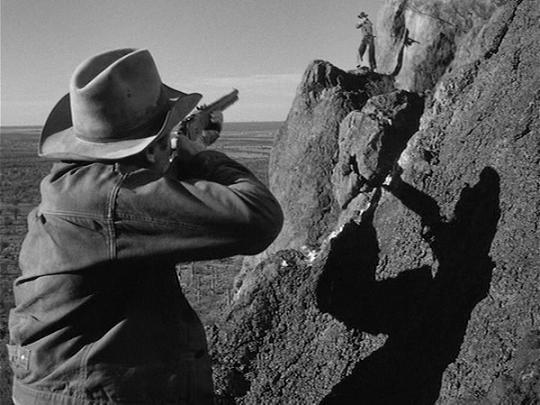 Duel in the sun
Mann had already made Devil's Doorway and The Furies, and very good Westerns they were too, but in a way, Winchester is his first real Western and Stewart is a good part of the reason for that. It contains an attack by Indians on cavalry, a shoot-out in the street, a poker game, a stagecoach, a camp fire, a cowardly Easterner, Wyatt Earp, a bank robbery, a saloon fight - those key ingredients we know and love. And of course it's about revenge.

The others were Bend of the River (1952); The Naked Spur (1953); The Far Country (1955); The Man from Laramie (1955) which I consider his masterpiece and obviously I know better than he does; The Last Frontier (1955) with Victor Mature, in my view not as good; The Tin Star (1957) with Henry Fonda; Man of the West (1958) with Gary Cooper; and Cimarron (1960) with Glenn Ford, which he made before moving on to epics, and indeed there is something epic about that Western. You might consider also The Tall Target (1951) with Dick Powell a Western but most people don't. Eleven Westerns is the usual total.


Winchester '73 is an adult movie, a Western for grown-ups, a taut tale of brotherly hate in which Abel kills Cain.