The least of ‘em

Westbound is the least of the Budd Boetticher/Randolph Scott series of late 1950s B-Westerns, which we have been reviewing. Not that it’s bad. It’s just not as good as the others. It wasn’t produced by Harry Joe Brown and the screenplay and story were by Berne Giler, a TV writer who had also done three B-Westerns. It's Warners, not Columbia (the last movie Randy made for them, and in fact Warners pretty well abandoned the oater thereafter, till the late 60s). Virginia Mayo is only in it for ten minutes and there are far too many lingering close-ups of Karen Steele, a weak actress, instead. Furthermore, there isn’t a larger-than-life bad guy with charm along the lines of the colorful villains in the other pictures. 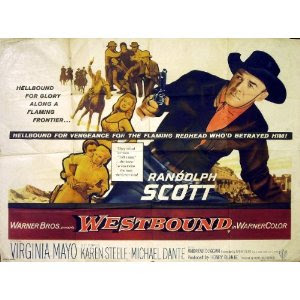 It’s about a US Cavalry officer (Randy, back in his uniform from 7th Cavalry, 1956) who in 1864 reluctantly and rather implausibly becomes the boss of a stage line, in Colorado, to keep the gold moving to the North during the Civil War. The Southerners, of course will stick at nothing to stop this. It has similarities with Springfield Rifle in this way. The bad guys are led by Andrew Duggan (unfortunately insipid this time), who grabbed Virginia away from Randy, so there’s a double reason for conflict. Scott is good, he was almost never anything else, but he seems old (he was 60), tired and lacking enthusiasm compared with other late-50s pictures.


The best part is the one-armed soldier Michael Dante (Karen Steele's husband) trying to manage life with such a crippling injury. Dante is very good. I also like Duggan’s thugs led by Michael Pate (not playing an Indian chief for once but more like his character in an earlier Scott Western, A Lawless Street). 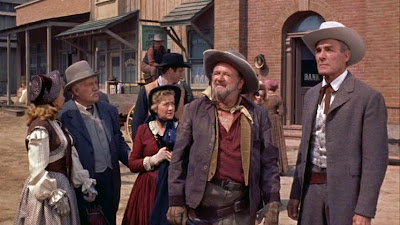 Jean-Luc Godard, in homage to Budd Boetticher, has his characters in Breathless go into a movie theater to see this film.  Would I be naughty if I said that was hardly a qualification for cinematic greatness?


Randy is stalwart and alone and determined, as per usual, so no change there. He’s helped when the bandits attack the stage with a woman and child aboard and all the passengers are killed. That puts Duggan beyond the pale. 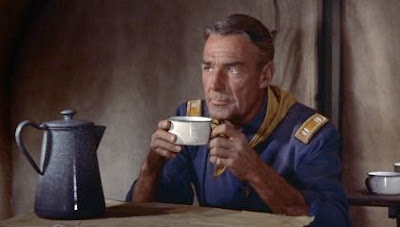 The David Buttolph music is not the dark, sinister score of the Ranown pictures but a perky little piece that tends to grate.

It had pretty well double the budget of the Columbia Scott/Boetticher Westerns but that didn't seem to help. I think what’s missing, apart from a good badman, a good screenplay and good production, is energy. It just seems all rather routine. That’s OK. It was a B-Western after all. But by 1959 we had become used to high-quality productions with taut, gripping plots and this wasn’t it. Well, they were allowed one mediocre one. Boetticher said it was "crap". It wasn't but it wasn't very good either.

You'd be much better off with Ride Lonesome the same year.