And I looked, and behold a pale horse: and his name that sat on him was Death, and Hell followed with him.
Revelation 6:8


Pale Rider is either a remake of Shane or Eastwood’s homage to it. Either way, it’s superb. Actually, I think in some ways it’s rather better than Shane (heresy, I know but there we are). It’s as visually stunning as the 1953 picture (Bruce Surtees, a genius behind the lens, doing a Loyal Griggs, even if unOscared) but Clint as the lone gunfighter riding in is ten times better than soft Alan Ladd, the baddies are nastier, the honest folk that the gunfighter protects are more convincing and the kid is older, does not whine and is a girl. 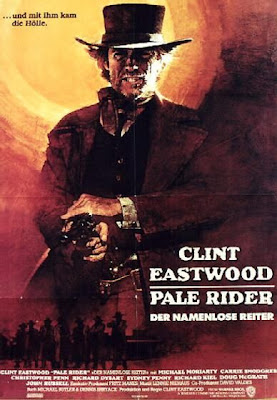 Along with Silverado, the movie came out after half a decade of Western drought caused by the Titanic-like Heaven’s Gate, which nearly sank the Western genre single-handed as studios shied from producing another huge loss-maker. We should be eternally grateful to Mr. Eastwood for doing that. 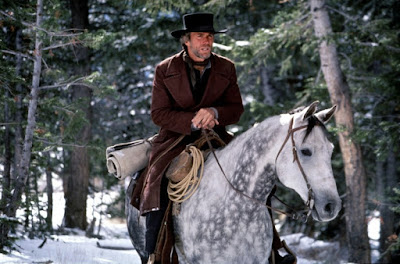 The pale horse
In some ways the movie is another chapter in the long Western history of the man with no name. Even in the Dollars films Clint was riding into town, shooting a few bad guys and riding out. He did it a lot – think of High Plains Drifter, for example. Here he is again, older and grayer to be sure but still ridin’ in, rightin’ the wrongs and ridin’ off into the sunset. Pretty much in the same costume, too. And we still don’t know his name. The German title to the movie was Pale Rider: Der Namenlose Reiter. Maybe, like me, Mr. Eastwood spent a lot of his childhood watching The Lone Ranger and it got in his blood. 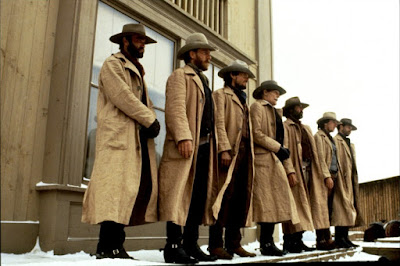 And of course there are seven
In some ways the movie is therefore a very traditional Western. There is a town ‘owned’ by a rich fellow in league with a crooked banker and with a bought-and-paid-for marshal. A stranger rides in and takes the side of the honest but exploited folk. You’ve seen it in Shane, Open Range, oh, any number of times. This puts us in the Western comfort zone and adds main-street-cred to the movie.


And of course it is full of Shane references, such as the attack on the giant rock, standing in for Van Heflin’s tree stump.


But in other ways Pale Rider is original and different.


The movie has an ecological tinge. The bad guys are raping the land by using high-pressure hydraulic mining techniques, whereas the good guys are seeking gold in a more eco-friendly manner.


There are religious overtones (or are they undertones? I never quite know the difference). The gunfighter turns out to be a preacher. He arrives on the day the girl has asked God (“if You exist”) for “just one miracle”. But the preacher has a short way with gunmen and when he says grace suggests that “for what we are about to receive may we be truly grateful”: the Lord doesn’t even get a mention.


The Preacher is often backlit, hard to see or with his face in shadow. It all heightens the mysteriousness of the nameless stranger.

Shadow
The acting and casting are very good. Eastwood is magnificent and there isn’t a bad actor in the film. We might single out for praise Carrie Snodgress and Sydney Penny as the mother and daughter who fall for the stranger, Doug McGrath in the Elisha Cook Jr. part as the fellow shot down by the gunman and especially John Russell as Stockburn, the leader of the killers (there are the mystic Western number seven of them, of course) who is brilliant as the ruthless gunman in the Lee van Cleef tradition. And we thought Jack Palance was good!


I was pleased to see Fran Ryan in the role of Ma Blankenship: she was the best Mrs. Samuel (Jesse James’s mother) ever.


Writers Michael Butler and Dennis Shryack were far from Western experts (Butler had never done one) but the screenplay was good enough to win them a Spur Award from the Western Writers of America.


If I have a criticism (and I guess I am a critic really so I’m entitled) I would say that the Preacher is too proficient. You never really think that he might not eliminate all the gunmen. I’m not saying he ought to have been like the bumbling amateur but lucky sheriff in Firecreek, or McCabe up there in the cold country getting the bad guys more by luck than skill. I just think if he hadn’t been quite such a superman it would have heightened the tension. But then one notion is that the Preacher is a ghost, a sort of avenging spirit. Stockburn had seen him die. He is the pale rider whose name is death and Hell follows with him.


I might also add (OK, I know that’s two criticisms) that the sexual tension was weakened rather than the reverse by the Preacher sleeping with Sarah. In Shane, the attraction of Shane to Marian (and vice-versa) is very powerful but always lies under the surface, unstated and unacted upon. But then that was 1953.


The Sawtooth National Recreation Area in Idaho made a stunning location. Visually, this film is wonderful – the equal of Shane. I think it’s the best Eastwood Western apart from Unforgiven, better even than Josey Wales.