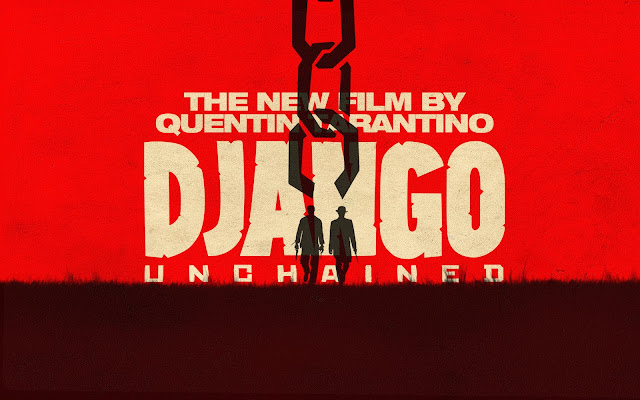 Well, it’s spectacular, I’ll give it that. And long. Actually, at 2 hours 45 minutes, it’s too long. It is really a bit self-indulgent and needed a good editor, and Fred Raskin wasn’t it. Maybe he wasn’t allowed to by the boss. It meanders and is repetitive, and there are really two stories. I appreciate that if you’re going to take the trouble to go out to a movie theater, you don’t want to go for a 75-minute movie any more. But there are limits. And imagine when this comes on TV. With the advertisements it’s going to take up the whole evening schedules. Though even in today’s libertarian age it’s hard to see just how it could go on TV at all. There’d have to be so many cuts that it would be impossible.


Half the dialogue will have to go for one thing. Perhaps Tarantino was getting back at Spike Lee after Lee rapped him over the knuckles for using the n word in Jackie Brown. Quentin’s response: spray the word around like Gatling gun fire. (Come to think about it, I wonder why there wasn’t a Gatling gun. There usually was in spaghettis). I understand that Mr. Lee has condemned the film on moral or racist grounds while declaring that he will not view it. This is never a convincing standpoint. So often conservative critics have slammed movies because they are too blasphemous/too sexual/too violent/too profane/too whatever (make your choice) while stoutly stating that they would rather die than actually see them. Doh.


And then the violence. I was saying the other day how the off-screen shooting of James Stewart’s hand in The Man from Laramie shocked mid-50s audiences. Well, we have had Peckinpahism since then, and Sam certainly loved to spray the blood. Brian de Palma too, whom they dubbed Brian de Plasma for his penchant for crying out, “More blood! More blood!” But Tarantino makes these look like babes in arms. This is way beyond Python. In Django Unchained, the new Prince of Plasma was crowned. Brace yourself.


One basic problem I had with this Django was that unlike Mr. Tarantino I never liked Italian westerns in the first place. This is a post-spaghetti, full of affectionate quotations which will delight the spaghetti aficionados, if I may mix my languages for a moment. Franco Nero even has a cameo. He looks remarkably like his previous persona, very well preserved. He asks the black Django if he can spell his name. He can. The D is silent, he says. Yes, I know, replies Franco, slowly. Interestingly, in his three lines, Signor Nero out-acted everyone else in the room including Leonardo Di Caprio. 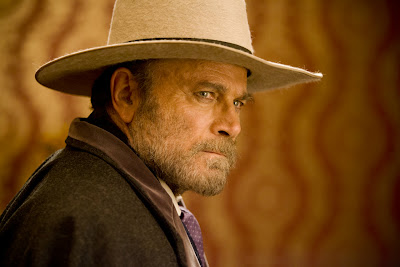 Personally, I found the mortal combat staged for the amusement and wagers of two “gentlemen” revolting but I suppose that was the idea.


The screenplay is clever, witty and funny. The characters’ names are amusingly odd.


Naturally, history is thrown straight out of the window, in the opening screen title, in fact, which tells us that 1858 was “two years before the Civil War”. But then we’ve watched many, ahem, slightly unhistorical spaghettis and we’ve already seen Tarantino play with ‘alternative history’ in Inglourious Basterds when he personally brought the Third Reich, including Adolf, crashing down in flames. It’s history as it should have happened according to Quentin. And after all, perhaps we needed a monstrous Western falsification here to correct that appalling, simpering Gone with the Wind southern-belle type pap that we were brought up on, that didn’t even show slavery, never mind condemn it. Gone with the Wind, did I say pap? I meant crap. (It was only ever an expensive filming of a cheap romance). I mean we all WANT the black guys to shoot the whole lot of those appalling Southern white gentle-trash including the women and blow up their mansions with dynamite, don’t we. And I speak as a white man. So Tarantino gives us what we want, that’s all. What could be wrong with that?


And anyway, spaghetti westerns were just commercial exploitation and those Blaxploitation movies too, so Mr. T has simply combined them.


It really is a great movie.


Of course in some ways it is in dreadful taste. Well, it’s a spaghetti western about the slave trade made by Quentin Tarantino. It was never going to be Arsenic and Old Lace, was it. You knew that before you bought your ticket.


In some other ways it’s a total anti-spaghetti. Its length, budget and high production values alone disqualify it.


The music is good, for one thing, not the jangly junk (the ds are silent) we used to get in those dire Italian westerns. There doesn’t seem to have been a music director and score as such (Robb Boyd as ‘music editor’ and Mary Ramos as ‘music supervisor’ get credits very low down the list). There’s just a series of songs, of mixed quality it must be said. I heard a nice bit of Johnny Cash. The title song was the same trashy ‘ballad’ (I think it was by the cheesy, unmusical Ennio Morricone) crooned over 1966 spaghetti opening titles. Quite funny.


And the locations, swampy Louisiana and wonderful winter Wyoming, beautifully photographed by Robert Richardson (The Horse Whisperer). I mean it wasn’t that gray bit round the back of Almeria, Spain yet again that we were so used to in Sergio Corbucci’s day, was it. 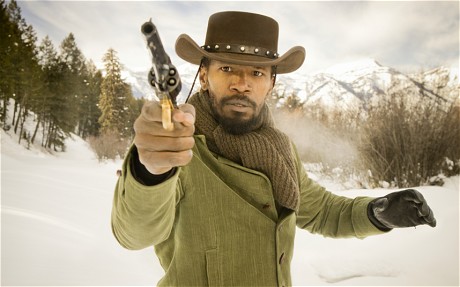 Well, Jamie Foxx as Django is superb, the way he starts all low-key and bottled up, to grow, then explode in an orgy of retributive violence that Sig. Corbucci could never have imagined in his wildest dreams. He goes from slave rags to dude riches and from whipped human ‘property’ to pure 60s gunslinger. It’s a first-class performance, really. I always though Mr. Foxx was good in action films and the like, Miami Vice, The Kingdom, that kind of thing, and I liked Ray, but I hadn’t realized till now that he was capable of such power and subtlety. Not that subtlety was really the first word that came to my mind as I staggered from the movie theater after the show, I must admit. Power, yes. 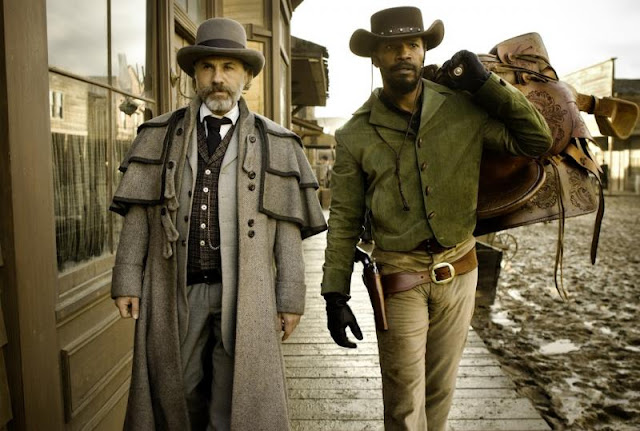 The star, in every sense, though, is Christoph Waltz as Dr. King Schultz, the man who finds and releases Django and recruits him as bounty hunter. I thought Mr. Waltz by far the best actor in I. Basterds. He won the 2010 Oscar for it and I see he has already been nominated for the 2013 ones for this. Actually, his Schultz has something in common with his Col. Landa in Basterds: here too he is a smiling, intelligent, educated killer. He looks like Verdi in his beard. 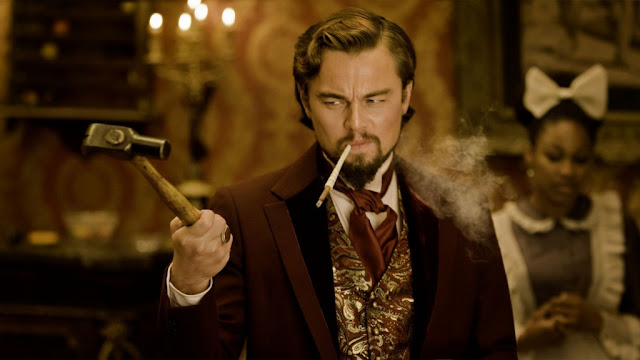 L Di Caprio is good as the utterly repellent Caligula-esque Southern slave owner Calvin Candie. The name of his plantation wouldn’t be a dig at Disney, would it? He looked as though he was enjoying the part and he certainly made the most of it. Samuel L Jackson, Tarantino stock company member, is also excellent, a creepy Uncle Tom, as the elderly Fool or jester, given license. He looks out from under white brows like a malevolent black Boris Karloff. Don Johnson, all dandied up, has a whale of a time as another planter, Big Daddy, who also gets his just desserts from Messrs. Django and Tarantino. He and his like certainly didn’t get them back in the 1850s but we have to live with that and just enjoy his posthumous comeuppance. Who else?


Well, I liked Laura Cayouette as Candie’s sister (was there a hint of a, how may we say, closer relationship there?) Fading, stupid, ladylike (just), unwittingly cruel (unwitting because she hadn’t the wit), it was an excellent performance. Walton Goggins from Cowboys and Aliens was satisfactorily horrid as gunman Billy Crash and James Remar quite like the photos of Butch Cassidy as the bodyguard Butch Pooch (Pooch, indeed) in a derby. He looked very competent with his guns. He wasn’t, though.


I was delighted to see one of my favorite badmen from older Westerns in there as Old Man Carrucan, namely Bruce Dern. He was always perfectly horrible and menacing as the bad guy. Such a good actor. Robert Carradine (Mr. Kung Fu, Bob Younger in The Long Riders, you know, also good in the later, Selleck Monte Walsh) was billed as ‘Tracker’ but sadly I missed him (doubtless I’ll be watching again). Russ Tamblyn, whose character in this film is billed as ‘Son of a Gunfighter’, starred in the 1965 movie Son of a Gunfighter, not a Western I know, I fear (well, it’s a spaghetti). But I do vaguely remember him from older low-budget Westerns and I think he was in the utterly appalling Seven Brides for Seven Brothers, one of the worst movies ever to disgrace the name of Western, which it wasn’t. Anyway, these appearances are enough to establish Mr. Tarantino’s credentials as a Western watcher, so we must be nice to a fellow-crazy. It ought to be added perhaps that as an actor, Quentin Tarantino himself makes a great director.


All in all, though, a very strong cast indeed and some great writing from Quentin for them.


And another thing, derringers play a big part in this movie so what’s not to like?


Critics have roared with laughter at the KKK scene. Actually, I thought it Mel Brooksish and funny briefly but labored, although I suppose it was a good riposte to DW Griffith. Still, pass the scissors, would you? 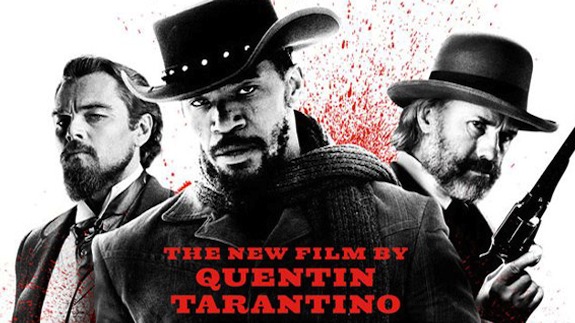 The film’s ending is, er, explosive. Let me just say, so as not to spoil your fun if you haven’t seen the movie yet, that in the best spaghetti tradition it involves guns and dynamite. And the d is not silent.


Thomas Patrick in The Huffington Post wrote, “An improvement on recent films, but by no means a classic, Django remains chained to an overinflated, self-indulgent mess. But it's a brutally fun mess.”  That’s perhaps a bit harsh but does contain a grain of truth. Robbie Collin in The Telegraph said, “As in all of Tarantino’s best films, there is a strange and brilliant magic at work here; a dark, bubbling alchemy of art and junk.” Yup.


In one sense the world needed another Django film like a hole in the head. But then it isn’t in any real sense another Django film, for all the nods and Franco Neros in it. For if they were junk (and most of them were) spaghettis were spare, low-budget affairs rolled out on a production line just to make a few dollars more. They were genre-referential, as this one is, but really if Django Unchained is a spaghetti western then I am Sergio Leone. It’s a Twenty-first Century trash/blood romp which may become a cult of its own, who knows. It’s flashy and stylish and wry. But it’s overblown.


I suppose Quentin Tarantino had to do a Western eventually, just as the Coen brothers did. I mean they, we, were all brought up on them. We have all sat in too many movie theaters too many times for the Western not to seep into our blood.