In a post-Heaven's Gate period of drought when A-Westerns weren’t being made (Cimino had almost sunk the genre single-handed), Clint Eastwood and the Kasdans (praise be to them) revived the cowboy film half way through the decade with two first-class 1985 pictures, Pale Rider and Silverado. You could go to a movie theater and see a proper Western again.


They are both classic, straight-down-the-line Western pictures with no overly artistic or psychological pretensions (perhaps Pale Rider a little more than Silverado) and they are both a Western fan’s Westerns. Silverado is the more fun, the more full of energy. The whole crew must have had a whale of a time making it. Lawrence Kasdan (director, co-writer, co-producer) said, “We wanted to remind people of the pleasures that we had had in Westerns growing up.”


They succeeded. He and his brother Mark’s love of the genre shines through. Lawrence wrote Raiders of the Lost Ark with George Lucas, and Silverado too crackles with action and fun. The movie packs in all the traditional features of the Western of the golden age and yet manages to do it without clichés or corniness. It comes across instead as affectionate quotation. Peter Stack wrote in the San Francisco Chronicle that the film "delivers elaborate gun-fighting scenes, legions of galloping horses, stampeding cattle, a box canyon, covered wagons, tons of creaking leather and even a High Noonish duel. How it manages to run the gamut of cowboy movie elements without getting smart-alecky is intriguing." Roger Ebert in the Chicago Sun-Times wrote, "This is a story, you will agree, that has been told before. What distinguishes Kasdan's telling of it is the style and energy he brings to the project."


Ian Freer in Empire thought the film was the "kind of picture that makes you want to play cowboys the moment it is over." He said, "Whereas many of the westerns from the ‘70s try a revisionist take on the genre, Silverado offers a wholehearted embracing of western traditions."


Visually, it is outstanding. As so often in more recent Westerns, the production design (Ida Ransom) is authentic in detail. They built the biggest ever Western town near Santa Fe for it. The photography is by John Bailey, an admirer of Georgia O’Keefe paintings. The film is shot in glorious winter New Mexico light, often with ultra-long shadows, and is stunning. There are wonderful pinkish South West landscapes. It’s Bruce Surtees quality. It’s that good. This movie glows. 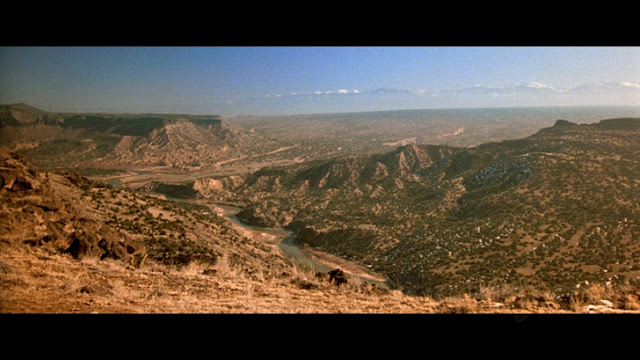 And to be fair to Heaven’s Gate (I do try) that was photographically outstanding too, perhaps Vilmos Zsigmond’s finest work. So what with Surtees’s Pale Rider shot up in Idaho, the 80s sure produced some magnificent Westerns to look at. With Heaven’s Gate, of course, that’s all there is. (You see, I told you I was fair).


The Bruce Broughton music in Silverado is also superb: classic, stirring, traditional, quite Star Wars-y in a way. 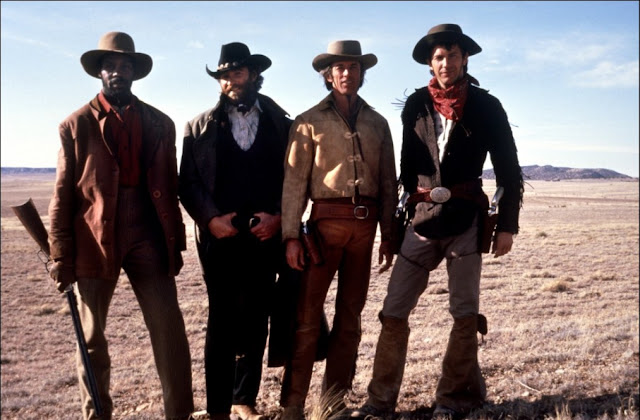 The acting is terrifically good. The four protagonists, (left to right above) Danny Glover, Kevin Kline, Scott Glenn and Kevin Costner, are proper Western heroes, tough, strong and decent. Supporting cast are also enjoyable: we might mention in particular John Cleese as the canny English sheriff, Rosanna Arquette as a tough farmer woman, Linda Hunt as the saloon keeper (she’s terrific) and especially Brian Dennehy as the corrupt sheriff of Silverado. He’s the smiling rogue, Robert Preston, Richard Boone and Brian Donlevy all rolled into one.

One of the great tragedies of Silverado, nay, of the whole history of the Western, was the decision by Mr. Kasdan, woe be unto him, to cut out the scene where Kevin Kline, having just shot a man who had stolen his hat (fair enough), kicks up the Stetson from the floor in a saloon with the toe of his boot and it lands on his head. Is that cool or what? Luckily you can see it in an out-take on the DVD. Majestic. 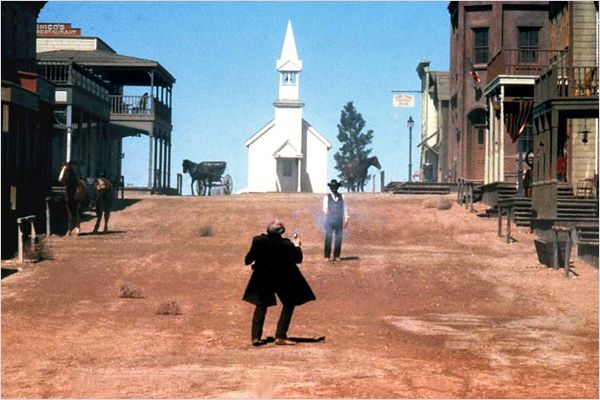 The opening and closing shots are classics: a silent, dark cabin that explodes in noise and light, with Glenn walking out of a Fordian doorway (affectionately quoted) so that we see a whole panoramic New Mexico before us; and at the end of the movie a classic showdown with Kline, in Gary Cooper High Noon costume, in another reference to a classic Western, standing in the main street with a shining white church behind him and bad Dennehy, in frock coat, against the backdrop of bleak desert.

There’s a Fordian dance which is shot up by raiders (exactly as in Pale Rider, being filmed at the same time). There’s a rancher/nester conflict theme, it’s got horses and gunfights and great saloons and fisticuffs, there’s a stampede, hell, it’s even got tumbleweed. I love it. 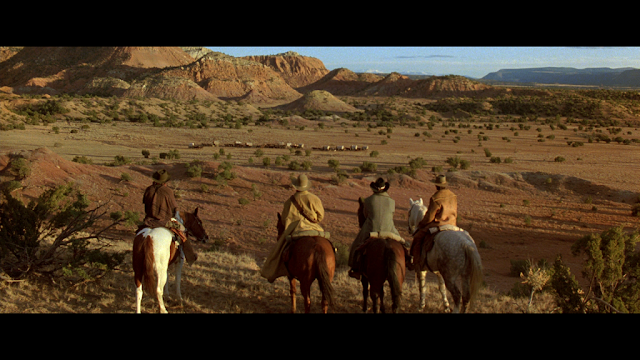