The Assassination of Jesse James by the Coward Robert Ford (Warner Bros, 2007)

Visually, this film is perhaps one of the finest Westerns ever made. Photographed by Englishman Roger Deakins in Alberta (with some in Utah), it features wind in waving grass and wheat, chiaroscuro and time-lapse skies. It is luminous, and each shot is framed as a work of art. You are left with a sensation of cold and bleakness. Episodes such as the locomotive's headlight piercing the trees before the train hold-up remain in the memory. There is a dream-like quality to many of the scenes and often an appropriately noir-ish look. Some of the frames are blurred at the edges to resemble old photographs, and there is a lot of brown and black, not in a kitschy nostalgic way but to create a subtle impression. Mr. Deakins, who had already done some fine work, notably for the Coen brothers (think of Fargo or No Country for Old Men), was influenced by the work of Andrew Wyeth (1917 – 2009), the American painter. The photography was nominated for an Oscar, with perfect reason. 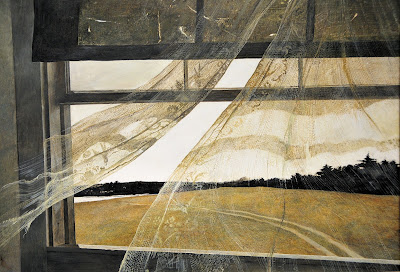 The visual beauty is accompanied by a fine score, by Australian musicians Nick Cave and Warren Ellis. It is dark, melancholy, slightly ‘folky’. (They had also worked on The Proposition, a very powerful film). Nick Cave has a minor part late in the film as the strolling minstrel in a saloon who sings The Ballad of Jesse James, to the chagrin of one of the customers at the bar, Bob Ford. The Cave/Ellis 2009 album White Lunar contains some of the music from the film. (For more on songs celebrating Jesse James, click here).


I make no apology in starting with the look and sound of this film. It’s what strikes you most and stays with you.


It seems to me quite extraordinary that New Zealander Andrew Dominik could create such a great film, and a great Western, with such a short track record. He had only directed one movie, Chopper in 2000, about an Australian criminal. Yet The Assassination of Jesse James… is the work of a consummate artist. The pacing of it is masterly. Not being an action ‘Jesse James shoot-em-up’ at all but rather a long study in gradually-growing paranoia, it could have dragged. It doesn’t. It builds (and builds) tension instead. Those critics (and there are some) who call it too long and too slow have really missed the point, and missed an essential quality of the film. 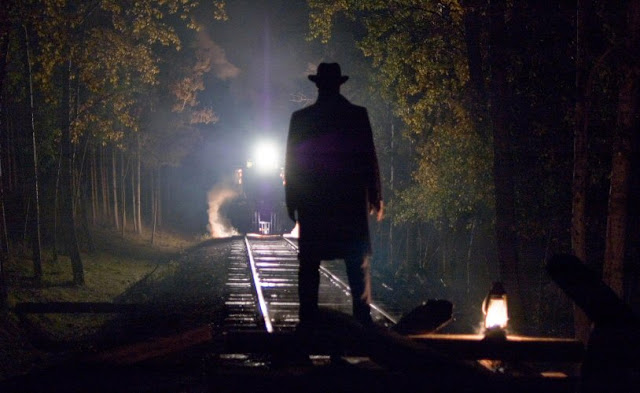 Frank at Blue Cut
In some ways it is not a Western at all, or if it is, it is the psychological Western par excellence, for there is no action in the classic sense. The violence, when it comes, is brutal, sudden and horrible. It is more of a Victorian murder story. There are no Stetsons and stagecoaches. The policemen have helmets and the plain clothes ones wear bowlers. We could almost be in London. 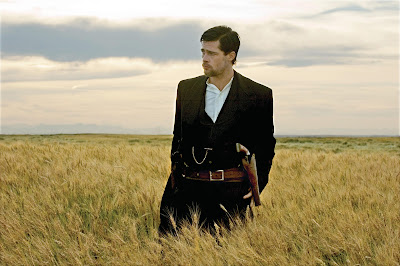 Jesse
The story concentrates on less than a year, from the Blue Cut train robbery in September 1881 to the shooting of Jesse in April 1882, with an epilogue of the Ford brothers’ later career and deaths.


There are three outstanding actors: Brad Pitt as Jesse, and Casey Affleck and Sam Rockwell as Bob and Charley Ford. Affleck was also nominated for an Academy award but any one of the three could have been. Between them they create an electricity. Pitt is psychotic, and as the voiceover says, merry, moody, fey, unpredictable. The sense of authority he conveys and the sheer menace, the fear he creates in the others, is remarkable. Bob Ford is almost in love with Jesse in this picture. It goes beyond admiration or even hero worship. And Jesse taunts him as one might a lover. There is nothing overtly homosexual about the relationship but there is an intense homo-erotic undercurrent to it. Roger Ebert in the Chicago Sun-Times perceptively wrote that “Since sex between them is out of the question, their relationship turns into a curiously erotic dance of death”. Ford’s obsession is such that that Jesse finally asks him, "Do you want to be like me, or do you want to be me?" 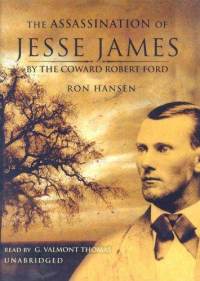 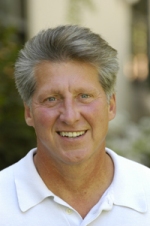 Ron Hansen
The notion of suicide by Jesse James is more than hinted at. The scene on the ice, in particular, reinforces it. When Jesse takes his guns off in the house, he announces ponderously why he is doing it (and Pitt delivers the line superbly) and equally deliberately turns his back and mounts the chair to dust the picture.


It would be churlish to criticize such a long film (one version had a running time of three hours +) for not developing character but I wish Frank James had figured more. Sam Shepard (outstanding – his best ever part?) is cranky, sour, bitter. We want to know more. 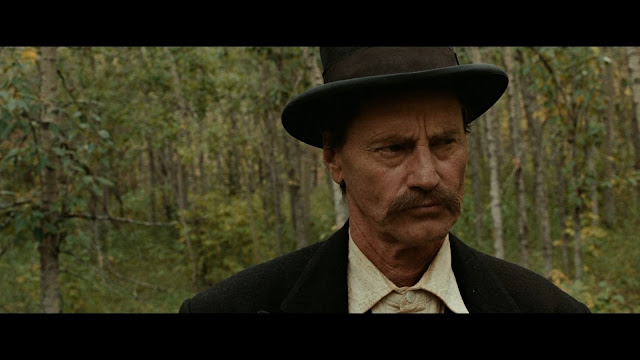 Frank
And I think the women were just adjuncts. They are peripheral. You could argue that they were peripheral in Jesse’s life and they were in society in 1880s Missouri. Both were very male affairs. But I thought more could have been made of the part they played in the drama. Zee (Mary-Louise Parker), in particular, emerges from the Ron Hansen book as a person who deliberately suppresses her worries about Jesse’s criminal career and chooses to live in ignorance. She’s an interesting character. This doesn't really come across in the film. Dorothy Evans (Zooey Deschanel), in whom Bob Ford confides late in life, is largely an invented personage. Martha Bolton (Alison Elliott), the Fords’ elder sister who harbors gang members, and Sarah Hite, Wood Hite’s stepmother, have little to do or say.


Another criticism might be that unless you have read the book (an outstanding novel, by Ron Hansen, also an associate producer) you are not always quite sure who these characters are: Wood Hite, Ed Miller, Dick Liddil. Why are they afraid (as they so clearly are) and why, exactly, are they killed? It’s a complex relationship and history which Jesse-freaks like us understand by now and those who have read the book will too, but I must admit that on first viewing of the film I came away from the movie theater with very positive impressions, yes, but rather mystified as to plot. The movie needs multiple viewings. It’s sure got them from me.

Browns and blacks, wind in the grass
Certainly the best Western since Unforgiven, this is a landmark in the genre. It harks back to Unforgiven in some ways, and to McCabe & Mrs.Miller. They are dark (in every sense), tense, psychological Westerns, visually striking (all three were shot in Alberta, in fact) and with a sense of brooding menace and coming violence.


Just when we thought that the whole mine of Jesse James cinematic treatment had been exhausted, that there was nothing new to say, along comes this masterpiece. This is the future of the Western. This is how they should be in this century. Magnificent.


I'm sorry about the changing font size in this post. However many times I change it, Blogspot insists on doing it differently. Very annoying.
Posted by Jeff Arnold's West at 11:19 AM