The high noon of the Western motion picture

Right, here’s the situation: you are on a sinking ship with a full cargo of DVDs and about to be marooned on a desert island. You have grabbed your solar-powered DVD player and monitor. You only have space for a dozen Westerns. What are you going to seize?


Well, this movie would be among them and could be the very first one to snatch.


So much has been written about High Noon that I hesitate to add to it, but on the other hand what would a Western blog be without comments on one of the greatest Western movies of all time? So here is what I will add to the discussion:


First, Gary Cooper (Will Kane) was the best of all the many Western movie stars (I think so, anyway) and in this film he was in his prime. 50 years old, he had lost that gawky youthfulness; he had even perhaps lost some of his beauty (for he was a beautiful man). But he had attained maturity and had gained experience and in the 1950s he had become a ruggedly handsome man with astonishing power as an actor. 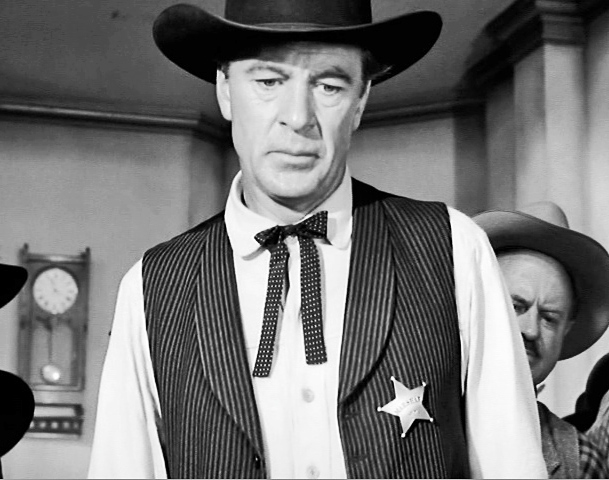 Gary Cooper. Magisterial.
He always had power, even as a youth. The economy of his acting is miraculous. It’s all done with the eyes. You can just see what he is thinking. He won an Oscar for High Noon, justly. Even Peck or Fonda would not have done it better.


Second, the movie is a tense thriller with a gripping plot set almost in real time - the first clock we see says 10.33 and the story finishes at about twelve-fifteen, so almost the same number of minutes has elapsed as the running time of the film. 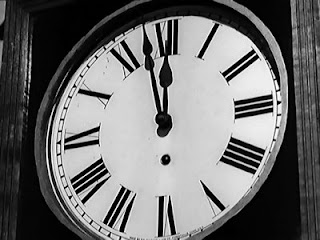 Tick, tick...
A thriller, yes, but it also deals with important themes such as loyalty, courage, honor, non-violence and self-respect. And like all good thrillers, you can see it again and again and still be thrilled.


Next, Coop’s fellow actors are outstanding.


Katy Jurado (as Helen Ramirez, in her first major Hollywood role) is absolutely splendid. She was a graceful and voluptuous woman and an actor capable of subtlety and nuance as well as power. It was a great part and wonderfully well done. At a time when women were stereotypes in Westerns - saintly homesteaders, prim schoolma’ams or saloon prostitutes - Jurado suddenly provided a different kind of woman, a person who had made her own way in the world and achieved if not total ‘respectability’ (she was a saloon owner, after all) then at least a status in the community and an independence. Despite the fact that she has been the mistress of the badman Frank Miller (Ian MacDonald), the marshal (Cooper) and now the deputy (Lloyd Bridges), she exudes a decency and pride that allow of no sneers or innuendo. The way she silences an incipient inappropriate question from the choir-singing storekeeper with a jut of her chin is magnificent. She carries herself like a lady, she is her own woman and she is the one with the courage and fortitude to tell Kane’s prissy, rather wet Quaker bride, “If Kane was my man, I’d never leave him like this.” On the set, as Katy Jurado deployed her usual way of looking directly, penetratingly into a person’s eyes as she spoke, Grace Kelly wilted under the ‘glare’ and fluffed her lines several times. 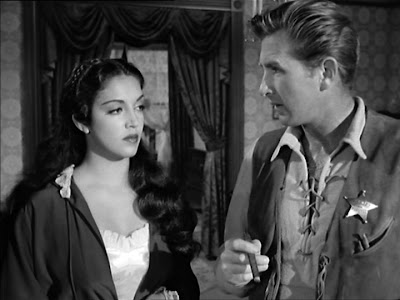 Jurado and Bridges, both outstanding


Apparently , on the set Jurado had a cool relationship with Grace Kelly (Amy, the pacifist new wife of the marshal), a woman who, according to Katy, appeared weak as a way of manipulating men (quite the opposite of Jurado’s approach!) and this was in fact ideal because it introduced an iciness between the two women into the movie. Jurado, the passionate, sultry Latin mistress in a dark dress confronted the very pale, overly demure prim-and-proper wife in white. As they ride in the buckboard to the railroad station together, each for her own reasons having decided to leave town on the same noon train that Frank Miller is coming in on, the two women could not be more different. No prizes for which of them comes across as the more impressive! 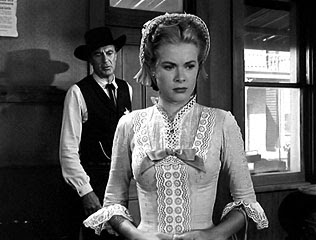 Kelly, weak link
Kelly seems rather wooden, if beautiful in a glacial way, and is probably the weakest actor present.


Lloyd Bridges (as Harvey Pell, the deputy) is brilliant. Fractious, impatient, jealous, rather too big for his boots, he is bitter at not being nominated the new marshal on the departure of Kane. Helen Ramirez knows full well that he is really still just a boy and needs to grow up first. It’s a superb performance by Bridges, who was a first class Western actor. He’d started as ‘Uniformed soldier (uncredited)’ in the plodding Northwest Passage in 1940 and had followed that with bit parts in a dozen or so low-budget Westerns in the early 40s. But by the Randolph Scott oater Abilene Town in 1946, Canyon Passage in ’46 and Ramrod in ‘47 (all classy films) he was starting to get bigger parts, and starting to impress. He’d acted with Coop in the semi-Western Unconquered in 1947 and had received his first leading role in a Western in the excellent and underrated Little Big Horn in 1951, where he played a grizzled Army officer – yet was able, the year after, in High Noon, to play a petulant boy.


As for the bad guys, they are a top-class bunch. Their boss, the released jailbird Frank Miller who is now coming into town on the noon train to kill the lawman who put him away, is Ian McDonald. Like Coop a Montanan, McDonald had, like Bridges, put in his time in bit parts in minor Westerns through the 40s but had then secured roles in pictures of of the caliber of Ramrod, Pursued and The Man from Colorado in the late 40s, and, in 1950, and appropriately, in Montana with Errol Flynn. He doesn’t have a big part in High Noon but in a way he does because he is constantly talked about and his anticipated arrival is the key to the movie.

Boss of the badmen, Ian McDonald as Frank Miller
His henchmen, waiting for him vulture-like at the depot, are superb: Sheb Wooley, Lee Van Cleef and Robert J Wilke. Wooley not so much – he was a country singer who dabbled in Westerns (sound familiar?) but Van Cleef and Wilke were classic baddies, about as good as you are going to get. Time I did a career retrospective of both. 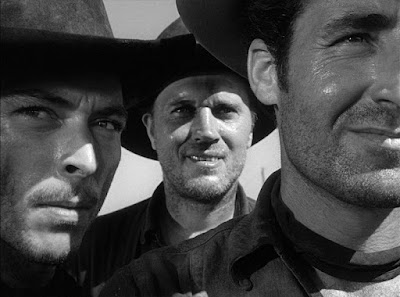 Great photograph of henchmen Van Cleef, Wilke, Wooley
Then of course there are all the frightened townsfolk. Thomas Mitchell got second billing, though his part was pretty modest as the mayor who appears to back the marshal yet in fact metaphorically stabs him in the back. Otto Kruger is excellent as the cynical judge packing his saddlebags, and Harry Morgan very good as the townsman who hides behind his wife’s skirts (Mildred Fuller, very well done) to avoid being deputized. Especially moving is Lon Chaney as the marshal’s predecessor, now racked by arthritis and unable to hold a gun. Morgan Farley is the minister who squirms around trying to reconcile his religion, status in the town and fear. 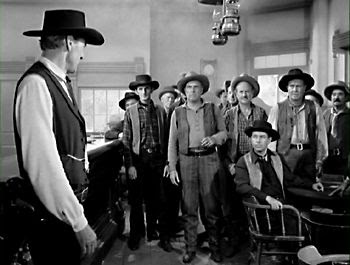 Pro-Frank Miller in the saloon


Let’s not forget the smaller parts. I thought Howard Chamberlain superb as the slimy hotel clerk and of course who should the town drunk be but Jack Elam! Great. James Millican is an uncredited deputy. Lee Aaker (the lad from Rin Tin Tin) is the boy. He was actually a very good actor. If you look carefully you can spot among the uncredited townspeople the likes of John Doucette, Harry Harvey and Syd Saylor.


So much for the cast.


Then, the famous music, what you might call ‘Orchestral Variations on a Cheesy Tex Ritter Song’ by Dimitri Tiomkin, also Oscar-winning. It is haunting and beautiful.


Another outstanding aspect of the film is the fine Floyd Crosby photography. The flat light and bright, white, glaring skies, the low-angle shots and sharp cuts all emphasize the pitiless realism. He used no filters and deliberately went for a ‘documentary’ look. They even highlighted Kane’s dirt, sweat and bruises. It is visually stark. There was flat lighting also for Cooper, to highlight, not smoothen his wrinkled, haggard face. The close-ups of the principals’ faces at two minutes to twelve are quite stunning. We see in their expressions all the different reasons why they have not stood by Kane. And we see the gloating anticipation of those looking forward to Kane’s death.


Together and in only 32 days, producer Stanley Kramer, director Fred Zinnemann, and scriptwriter/producer/partner Carl Foreman (who when told of the similarity of his plot to John Cunningham’s story The Tin Star, bought the rights to the story for $25,000) and cameraman Floyd Crosby, all on a budget of $750,000 (what a Republic Western of twelve years previously cost), enabled these excellent actors to perform a simple, moving tragedy of huge power.


Of course it was a statement of America’s pusillanimous refusal to stand up to McCarthyism, and Carl Foreman was blacklisted by HUAC shortly afterwards and fled to England. Floyd Crosby and Lloyd Bridges were ‘graylisted’. John Wayne (then President of the MPA) was convinced that the movie was anti-American and thought the famous scene of the lawman throwing the star of office in the dust unpatriotic. Howard Hawks thought so too. Doh. Hadleyville, New Mexico was suspiciously close to Mark Twain’s corrupted Hadleyburg.


When it came out, the movie did receive some criticism from traditional audiences of cowboy films who expected more chases, and the big outdoors. High Noon seemed too intense, too static, too talky, more like a theater play. You would have thought that the fight in the stable and the final shoot-out would have satisfied them but they didn’t really ‘get’ the power of the film. Others did, though, and even right-wingers like Dwight Eisenhower and Ronald Reagan greatly admired the movie. Some of the critics of the time were enthusiastic.  The New York Times review said that every so often “somebody of talent and taste, with a full appreciation of legend and a strong trace of poetry in their soul—scoops up a handful of clichés from the vast lore of Western films and turns them into a thrilling and inspiring work of art.” True.


The film was nominated for Academy Awards for Best Picture, Best Director and Best Writing/Screenplay. It won Oscars for Gary Cooper as Best Actor and also for Best Editing (Elmo Williams and Harry W Gerstad) and for Dimitri Tiomkin’s music – and in fact for Ned Washington and Tex Ritter. Katy Jurado, who ought to have won an Oscar, won a Golden Globe for Best Supporting Actress.


High Noon has had a lasting impact. Solidarność used it in Poland and Lech Walesa wrote, “Cowboys in Western clothes had become a powerful symbol for Poles. Cowboys fight for justice, fight against evil, and fight for freedom, both physical and spiritual. Solidarity trounced the Communists in that election, paving the way for a democratic government in Poland. It is always so touching when people bring this poster up to me to autograph it. They have cherished it for so many years and it has become the emblem of the battle that we all fought together.” 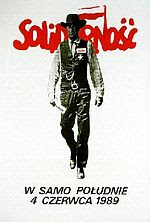 Symbol of Solidarność
High Noon is in some ways the definitive Western. 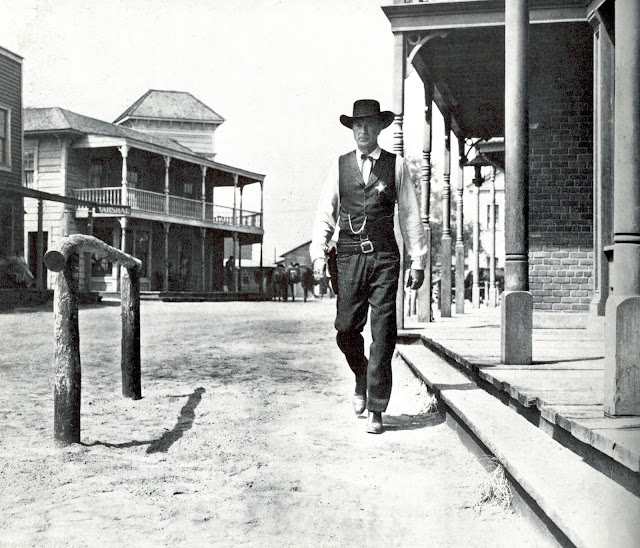 Does it remind you of the famous walk-down in The Virginian?