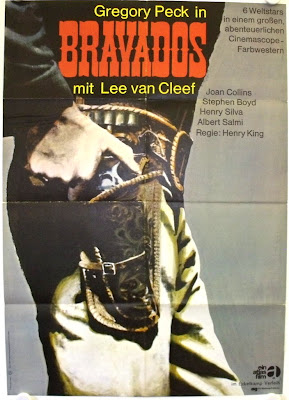 With The Bravados, now, we come to Gregory Peck's second-best Western. It is very, very good.


Henry King directed Gregory Peck in The Gunfighter in 1950 and The Bravados reprises some of the themes and the dark inevitability of death. It’s a fine, fine film, even if it is marred by two major weaknesses: firstly Peck is obliged to act with Joan Collins who, as we all know, as an actress would have made a great shop-window mannequin. She is perfectly awful and you can see Gentleman Gregory politely avoiding squirming when acting with her. Secondly, I don’t know if Henry King was a pious Catholic but the religion in this movie is so unbearably maudlin, sentimental and kitsch it makes you want to throw up. The final scene of Collins sending Peck’s pink-dressed baby daughter running to his arms in the church combines all these elements and almost ruins the whole film.


Those problems aside, The Bravados is a relentless revenge/pursuit drama with a twist. Peck is utterly superb, I would say even better than he was in The Gunfighter. What a fine Western actor he was.


There is the false hangman ploy that James Stewart copied ten years later in Bandolero! The baddies escape and Peck hunts them down, one by pitiless one.


He has a splendid dudish dark blue John Wayne-type shirt, very handsome, even if he wears it through the entire picture so it must have been pretty manky at the end. There is nice scenery (it was filmed in Guadalajara and the San Jose Perua mountains in Mexico, photography by Leon Shamroy) but an indifferent score by Lionel Newman (though many people like it).


Really, the movie is a hymn to the futility of revenge. Peck also said that it was an anti-McCarthy statement but it’s not so easy to see that. At any rate, it’s a fine Western, a must-see.