1948 was a wonderful year for Westerns. Although Red River and Fort Apache (and The Treasure of the Sierra Madre if you think that’s a Western) towered over all, there were some very successful other pictures such as Whispering Smith, The Paleface, 3 Godfathers and, in particular, Four Faces West and Yellow Sky. It’s a pretty impressive list. And Yellow Sky, directed by the great William W Wellman, was perhaps the ‘best of the rest’. It came seventh in the box-office rankings that year, grossing $5.6m on its $2m budget and selling 14 million tickets. 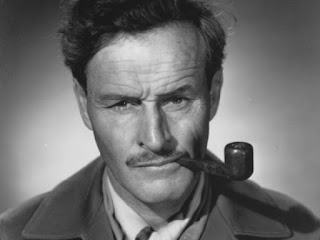 We know that Gregory Peck was always fine in Westerns. In this one he is a tough hombre, an outlaw leader, who gradually moves towards decency and honor. He starts unshaven and hard as nails, but once he has bathed and put on his The Bravados shirt (he falls for Anne Baxter, you see) he becomes a goody. He is in fact the classic good badman brought to decency by the maid. William S Hart did virtually nothing else. It was one of the great stereotypes of the Western genre but it doesn't feel clichéd or corny in this picture, not at all. That's largely because of good writing and superb acting. 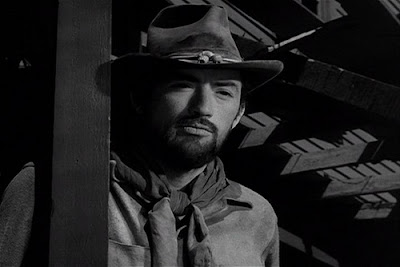 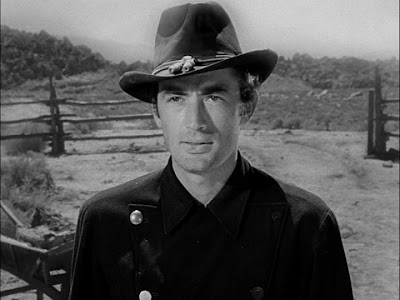 In his gang we have smooth Dude (Richard Widmark, very good, like a rattlesnake), an unscrupulous frock-coated gambler with only one lung who always throws a 7 with his dice. It was Widmark's first western and he was excellent. 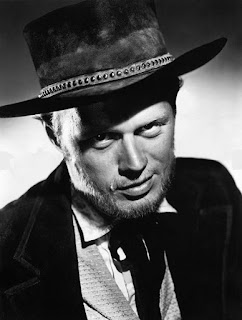 Widmark's first Western - and one of his best

Then there's young Bull Run (Robert Arthur) – because there has to be a kid. Lengthy (the excellent John Russell), Clint-like in appearance is seriously nasty. Harry Morgan as Half Pint, who can’t help being cheery, even as a badman. Walrus (Charles Kemper) provides the fat-man/slightly-comic relief. Peck acts the pants off all of them, though. He seems to be playing Gary Cooper. 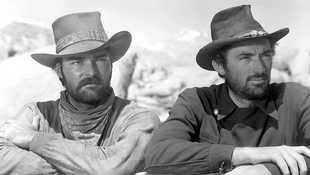 Russell was never less than excellent and he is superb here
They rob a bank and cross a very hostile desert to evade pursuit. In extremis they finally reach a town, but it's only a ghost town, deserted, they think, but..

Top marksperson Baxter, a demon with both Colt and Winchester, and her grandfather live in the ghost town and mine gold secretly. The badmen get wind of it and boy, do the bullets fly. First Peck falls out with the rest of the gang, then the other gang members fall out with each other. (Widmark would do another Western in a ghost town later, the excellent The Law and Jake Wade, in which he was also very good.) 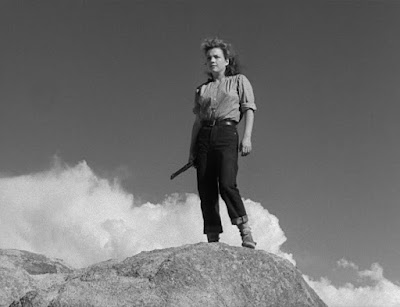 Tomboy Baxter
Baxter is called Mike. There’s quite a tradition in Westerns of the girl being called Mike. Jane Russell in Son of Paleface (Paramount, 1952) and Ms. Learned in Gunsmoke: The Last Apache (CBS TV, 1990) also have this moniker. And Claire Trevor was the rancher's daughter Mike in Texas (Columbia, 1941).

James Barton plays Anne Baxter’s grandpa so that we can have an old timer and thus there is the full deck of Western cards.

It’s not a fast-paced movie - in fact at times it’s quite slow - but it’s one of those Westerns in which the tension builds. Visually it’s stark and hard, photographed in bright black and white by Joe MacDonald in Death Valley. MacDonald and Wellman do quite a lot of close-up work, noir style. It has similarities with another 'dark' picture directed by William Wellman, The Ox-Bow Incident. It had a substantial budget for a black & white Fox Western. The ghost town was especially constructed. In temperatures topping 120°, with gila monsters and scorpions everywhere, it wasn't a comfortable set for the actors. 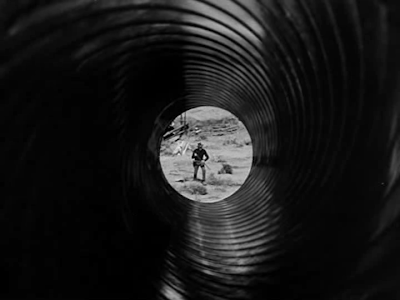 There’s a camera view taken down the barrel of a gun which must have inspired the people who did the credits for the James Bond movies.
The three-way gunfight in the ruined saloon at the end is good. A bit like The Shootist in a ghost town.

Overall, it’s dark and tense, although it has an oddly chirpy intro with happy music and a similar ending as Peck unrobs the bank and Harry Morgan dudes up (though he can only throw a two with Widmark’s dice). This almost light-hearted Alfred Newman music (reprised from Brigham Young: Frontiersman) is about all there is. The middle part of the film is done without background music, only the wind blowing through the ruined town breaking the ghostly silence and heightening the bleakness. It's actually very effective and every now and then a picture can actually be improved without music.

Tautly directed and well written as well as produced by Lamar Trotti, it’s no masterpiece, it’s no Red River, but it’s a terrific little Wellman Western that certainly deserves 3 revolvers. Because of Peck it verges on 4.

There's a sort of The Tempest vibe going on as the 'shipwrecked' outlaws arrive at a strange isolated place inhabited by an old-timer Prospero and a beautiful Miranda (though sadly no Western Ariel or Caliban).
It was remade in 1967 as The Jackals, with an entertaining Vincent Price topping the bill in the Barton old-timer prospector part, but the remake was pretty weak.