The Sunset of Wyatt Earp


So long, Wyatt, as you, and 2010, ride off into the sunset.And we reach the end of the thread of depictions of Mr. Wyatt Earp on the silver screen with the elegiac yet energetic Sunset.

Of course this is only a sample. imdb lists over 50 movies in which Earp appeared, either as star or in a minor part, http://www.imdb.com/character/ch0010210/ and that list isn't exclusive. But my little sample will do as a taster. 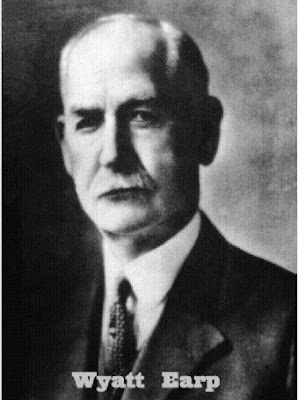 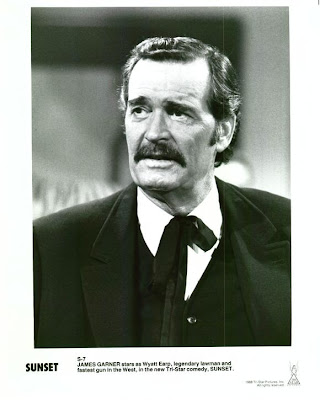 In this tale of Wyatt's later years, before riding off into the sunset (well, actually, he rides off on a train), Wyatt Earp and his friend Tom Mix have solved a murder in Hollywood and proved themselves true Western heroes. In this fun film, directed by Pink Panther supremo, the late Blake Edwards, Bruce Willis (Mix) and James Garner (Earp) do a great job. 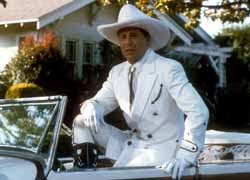 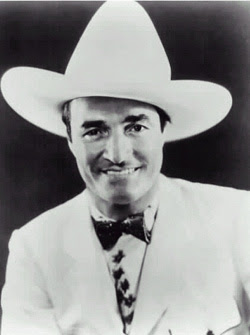 Earp died in January 1929, aged 80, and had acted as advisor on early Hollywood movies. He knew William S Hart and Tom Mix (and even met a very young Marion Morrison, later to be John Wayne) and Mix was one of the pallbearers at Earp's funeral. Garner was 60, not 80, when Sunset was made and is a shade more active than Earp would have been. Tom Mix is portrayed in his prime whereas in 1929 he was a fading star and pushing 50. But this film, like most Westerns, isn’t about the history; it’s about the legend.

It’s a Hollywood parody, a Western, a murder mystery and great fun. Garner had of course played Earp in Hour of the Gun. At one point he smells honeysuckle and reminds us of the scene in My Darling Clementine. The film within the film is called ‘Lawman’ (hope it was better than the rubbish 1971 movie of that title). There’s a slight reference to the death of Thomas H Ince, the ‘Father of the Western’, who may (or may not) have been murdered on a yacht. There are various other references – you’ll spot them.

Willis captures well the 20s Hollywood megastar and does a good Tom Mix (on a good Tony Jr). Malcolm McDowell is an ex-Chaplinesque star become sinister movie mogul. Mariel Hemingway is decorative as a brothel madam in male attire and Patricia Hodge classy as the mogul’s wife. I liked Richard Bradford as the corrupt LA police captain and M Emmet Walsh as the overweight, sweaty studio police chief.

Lightweight stuff, really, but none the worse for that. And there are some great cars in it.