Mommas, don't let your babies grow up to be philosophy book readers 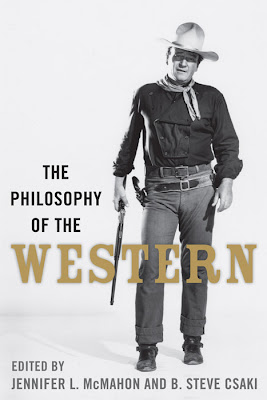 Mind, this 'philosophy of the Western' thing can be taken too far. B Steve Caski, in another essay in the book The Philosophy of the Western (The University Press of Kentucky, 2010), wittily entitled Mommas, Don’t Let Your Babies Grow Up to Be Pragmatists, argues that John Wayne Westerns are perfect examples of pragmatism as advanced by William James and John Dewey.
.
To accept this, you first have to believe that there is such a thing as ‘the John Wayne Western’. John Wayne was in many Westerns and perhaps more than many actors he put his personal stamp on them (though this is debatable in itself). Yes, he had a recognizable persona. Some of the later movies were Batjac productions, i.e. Wayne family affairs. But a Western is produced by a large team of people with varied input: writer or writers (sometimes from a novel by a different person), a director, designers and so on. Are The Searchers or True Grit or The Shootist ‘John Wayne Westerns’ more than they are ‘John Ford (or Henry Hathaway or Don Siegel) Westerns’ or Westerns with screenplays by x or y or z? Could they have been made with another lead actor? In fact The Cowboys, one of the two films (oddly) chosen by Dr. Caski to exemplify his theory, was first scheduled as a role for George C Scott. Wayne got it almost by accident. Could ‘John Wayne Westerns’ have equally been ‘Gregory Peck Westerns’? Yes. They would have been slightly different but not that different and the plot would have been the same, i.e. the philosophical challenges.
.
Then, secondly, you have to accept that Western heroes act in an especially pragmatic way, more than those in, say, war films or cop dramas. Dr. Caski says that Western heroes have to solve problems by gleaning all possible information and making the best decision on the basis of this. He says that in The Cowboys, deserted by his ranch hands, Wayne puzzles what to do and finally, at the suggestion of Slim Pickens, the barman, has recourse to a schoolroom of young boys to drive his cattle. This is true pragmatism at work.
.
Now sorry, but this won’t do. Any film whatsoever has to have some kind of plot, usually involving a dilemma of some kind that the lead actor has to face. Otherwise there would be no drama. Western hero Wayne’s choosing of the schoolboys is not especially pragmatic. In fact it’s a perfectly ordinary event with no foundation in any particular philosophy. You might just as well say that Humphrey Bogart has recourse to Jamesian pragmatism when deciding what to do in The Maltese Falcon. In fact, detectives have to do more information-gathering and sifting to decide their course of action than Western heroes, not less.
.
You can read anything into anything. You can say Westerns are perfect examples of this or that. You can pretend (and other essayists in the volume do) that Westerns are modeled on Socrates, Plato, Descartes, Locke, Rousseau, Kant and on and on. They aren’t, dude. Certainly not consciously and probably not even unconsciously. Some ‘creators’ of Westerns were aware of philosophical traditions. It is said, for example, that Tommy Lee Jones gave his actors on the set of The Three Burials of Melquiades Estrada a copy of L’Etranger by Albert Camus to read. But that must have been a pretty rare event. It’s overblown and rather precious to argue that such-and-such a cowboy movie is a glowing example of the thought of some dead philosopher. The Philosophy of the Western is a book you soon lose patience with. 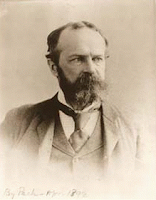 Yes, a perfect example of
pragmatism, what?
Posted by Jeff Arnold's West at 4:57 PM