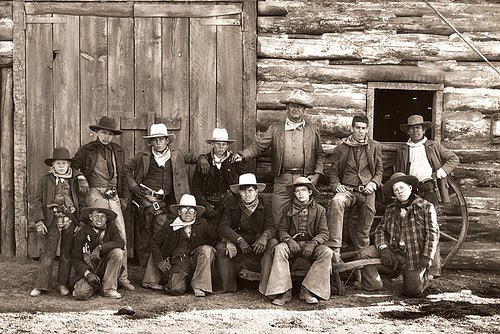 I like this movie. It was criticized by the liberal establishment at the time because it had John Wayne in it and portrayed innocent young boys being turned into hardened killers, and I suppose the liberal establishment had a point. But you can’t help cheering the kids on when they get revenge for the baddies’ perfectly beastly behaviour. And my excuse for liking the movie is that it was the 1870s and things were different then. John Wayne plays a grizzled sixty-year-old cattleman with a beer gut and toupee (he was actually 65) whose cow hands desert him to look for gold. Saloon-owner Slim Pickens suggests he draft the male contingent of the schoolroom and it’s the story of how these young boys try to prove their manliness to Wayne and grow up in the process. Some people said it was a Vietnam allegory but it wasn’t.

There’s nice Colorado/New Mexico scenery, lovely Bruce Surtees photography and a stirring sub-Bernstein score by John Williams. Wayne (who had to ask for the part, which was originally slated for George C Scott) puts in his best performance between True Grit and The Shootist. The other roles are good too: Pickens is sadly too soon written out but Roscoe Lee Browne is strong as the black cook with the right stuff (even if he does have a rather plummy accent), the children are excellent (not at all mawkish or slushy as so often in such films, and you have to admire their haircuts) and Bruce Dern is splendidly foul as the baddy, one of his very best roles. He'd learned how to scare the living daylights out of poor little kids in Will Penny, four years before.  Boy, is he mean.

There’s a rather pointless short bit with Colleen Dewhurst as a madam that should have been edited out.

Clay O’Brien, 10, the littlest cowboy, went on to be excellent in Cahill, U.S. Marshal when he was a grown man of 11. These days he stands six feet tall, is a rodeo star and has won seven World Titles in Team-Roping. Who would have thought it. Well, actually, you might. Those two films must have stood him in good stead.

The screenplay was written by William Dale Jennings (among others) from his own novel. The direction, by Mark Rydell, who had served his apprenticeship on Gunsmoke but whose only feature-length Western this was, is tight and professional.

The most stunning thing to viewers of this film at the time was that the Duke was killed. He had never died on screen before (except in The Alamo, where he had to) and the brutal shooting, by no means in the last reel (so I’m not giving away the ending), came as a real shock.

This is a good, well-acted Western which will stir you. It has action, authentic cattle and roping scenes, fun, gunplay and some good lines. Definitely one of the better products of the early 70s. Liberals notwithstanding.
.