You want noir? I can do noir 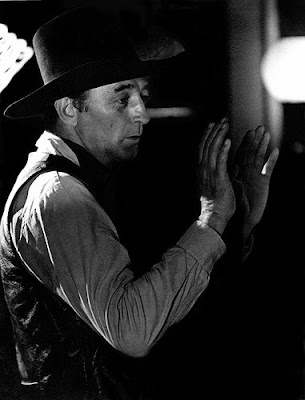 Niven Busch was a successful screenwriter and novelist who was fascinated with the West and had found in some El Paso archives a story of a vicious feud in which a young boy had been brought up by the family responsible for wiping out his own. Busch was attracted by the Greek tragedy of it, the inescapable destiny, and he persuaded Warners producer Milton Sperling to create a filmed version. .
He added modern Freudian tinges of childhood trauma and repressed memory as well as the obligatory love interest, this time with a daring hint of incest.
.
Neurosis specialist Anthony Mann could have directed it (as he did a later Busch story, The Furies) or fatalist Fritz Lang, but it went to the lusty, roguish Raoul Walsh, another great choice. I imagine Walsh saying: 'You want noir? I can do noir'. Teresa Wright, Busch’s wife, would play the female lead but Busch wanted a new, young, strong actor for the male lead, someone not immediately identified by the audience as a goody. Montgomery Clift and Kirk Douglas were considered (neither had yet done a Western) but Robert Mitchum was finally selected, who is utterly superb. The characters of Walsh and Mitchum were amazingly compatible. Mitchum was tough, Mitchum was powerful but above all, Mitchum was cool.

James Wong Howe was also a great choice to photograph it and the intricately-lit black & white ideally suits the themes of moral darkness and the light of the love that redeems it (if you’ll forgive such language for describing a cowboy film). It’s New Mexico “at the turn of the century” (Mitchum goes off to the Spanish-American war) and it was filmed around Gallup.

Yes, the movie does get a bit weighty and verges occasionally on the pretentious. Some of the 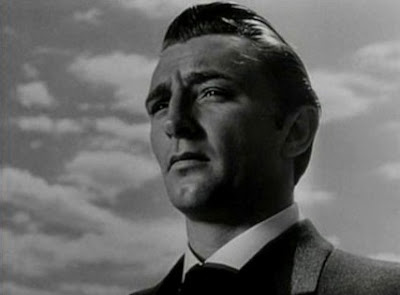 lines are meant to be deep but fall flat. There’s even the line by Mitchum to his foster-brother, “This ranch isn’t big enough to hold the two of us.” Mitchum gets away with it, though.
.
But by and large this an excellent little film. Deep down it’s just the find-your-father’s-killer plot, but with Walsh action.
.
Dean Jagger is great as the shadowy, one-armed villain dripping with malice. Judith Anderson is also fine as the tormented mother who raises the enemy’s boy with her own children and sees her family destroyed as a result. Only Wright is a tad weak. She meets Mitchum’s oozing sex appeal with too much sweet-little-girlishness. Walsh (who, it is said, had once borrowed John Barrymore’s corpse from a funeral parlor to frighten a drunken Errol Flynn) and Mitchum dreamed up a gag and when Mitchum came to the carrying-over-the-threshold scene, he threw her unexpectedly on the bed and made like he was for real. Wright screamed with panic. Cruel maybe but it hinted that she wasn’t really up to the role of raunchy, tough female lead.

Certain musical themes play a key part in the story, such as the Londonderry Air, and these are reworked interestingly, often in the minor key, and slow as a death march, by Max Steiner to give an appropriately brooding, intense score.

There’s a great cigar clipper in the store. I do like Victorian gadgets in Westerns.

This ’47 movie launched the adult, noir psycho-Western which became a mainstay of the late 40s and early 50s. It’s good, dudes.
.
Jim Morrison watched it the night he died but doubtless you’ll survive a viewing.
.