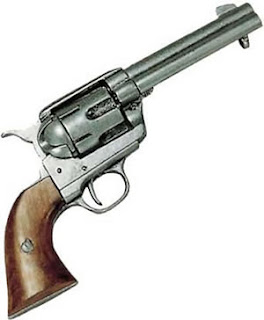 One objection to Westerns I have heard, from modern liberals mostly (Charlton Heston didn't e-mail me about this) is that the whole genre is based on guns. Guns are intrinsic to the Western. They are not just a useful accessory; they are essential. You can’t have a Western without guns. How awful.

Well, I have racked (what passes for) my brains. But I can’t come up with a single Western without guns.

There was a pious 1950s b&w TV series called Man Without a Gun, long-forgotten by present-day TV viewers, which had a new angle at the time as a family show, and which tried, worthily, to tone down the violent aspects of Western stories and concentrate on how outlaws could be brought to justice just as well by the printing press as they could with a gun. The pen is mightier than the Colt and all that. But the other characters had guns.

In real history, ‘Bear River’ Tom Smith, Wild Bill’s predecessor in Abilene, tried to bring law ‘n’ order to the wild frontier without a gun. But he got killed, almost beheaded, for his pains.

In Destry Rides Again, James Stewart tames a wild cow-town without a gun, but he has to resort to his daddy’s Colts in the final reel to eliminate the bad guys. So that doesn’t help. And later, as Ransom Stoddard, he at first refuses to confront Liberty Valance with a gun because he insists that civilization depends on law without recourse to deadly weapons. But we all know what happened to Liberty.

In some Westerns, the fact of owning or coming across a gun leads to all the mischief. See, for example Jim Jarmusch’s Dead Man, 1995. But they still have guns.

I therefore have a horrible feeling that guns are essential to the Western and that you can’t have a proper Western without them. I fear that this places Westerns firmly in the NRA firing-range.


In many movies, especially Wyatt Earp-based ones, cowpokes are obliged to hand in their guns at the sheriff’s office. Guns mean anarchy. See for example Winchester ’73 or Wichita. But the marshal always carries his, holstered proudly on his hip, and shootin’ always occurs. 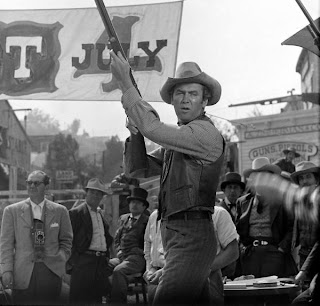 The kid who hero-worships the famous gunfighter JB Books (John Wayne) in The Shootist kills the man who killed Books but then (in the film anyway) throws away the gun, never to fire one again. But the film is about a gunfighter and is called The Shootist. So I think it unlikely that you will accept that as proof that Westerns are not gun-reliant.

Occasionally you will get a film in which no gun is actually fired. It is rare but it can happen. See for example Four Faces West (lovely little film). But in the first reel of Four Faces Joel McCrea holds up a bank at gunpoint so I don’t think you’re going to let me have that.

And of course many Westerns are specifically about guns. Even the titles,

to name but a lot.


Having a gun is important to a cowboy because he is on the wild frontier, far from official law, and he may have to shoot a rattlesnake but he may also have to shoot a human sidewinder in order to bring about justice where law is lacking. He will need his gun to fight off Indians and hunt animals to eat and, if all else fails, to gun down the bad guy.

The Colt .45 in particular is a must-have accessory for most film cowboys. If you don't have a Colt on your hip, you're nobody.

So hands up, this is a genre based on the gun.

And many Western writers, directors and properties experts knew a lot about guns and made sure that the right guns were used. Gun buffs are quick to spot an 1880s double-action Colt in a story set in the 1870s or a Peacemaker in the 1860s.

Even non-gun buffs can enjoy curiosities such as Arthur Hunnicutt’s 1850 Colt's revolving rifle in El Dorado (Marie Gomez also uses one in Barquero) or Clint in Pale Rider inserting a fresh chamber of cartridges into his 1858 Remington revolver with a .45 caliber conversion. 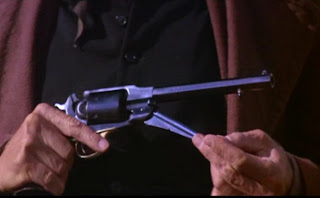 Specific guns are the source of interest in Westerns. Think of movies like Springfield Rifle, Winchester '73 or Colt .45.

I personally have rather a soft spot for the derringer. They were sneaky little pop guns used by slick gamblers and louche saloon women in Western after Western. Just occasionally the good guys used one, like Randolph Scott in A Lawless Street or Kirk Douglas in The Last Sunset.

Other guns have a certain charisma to them such as the Sharps. Here, think Quigley, Valdez or the True Grit remake.

Then there were the specials or one-offs like Steve McQueen's 'mare's leg' cut-down Winchester in Wanted, Dead or Alive or the sawn-off provided by the Swede that James Caan uses in El Dorado. 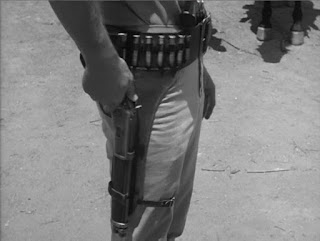 Guns are part of the mystique and how they are handled or worn is important. The gunbelts and holsters became more and more low-slung as the years went by. They became shiny and slinky and the more dudish were decked out in Spanish silver. Fonda’s twin gold-handled Colts in Warlock even earned the film the title L’Homme aux Colts d’Or in French. As for The Lone Ranger, his belt and pistols must have cost a fortune.

Hollywood adopted with enthusiasm the quick-on-the-draw nonsense that came from dime novels and later pulp novels, and holsters became more low-slung so that the gun could be pulled with lightning speed. Complete hooey, of course, but an essential part of the Western myth. try, as an example, The Fastest Gun Alive, with Broderick Crawford fanning his double-action Colts (you try it). 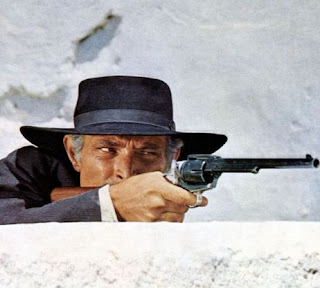 As the 60s came on, firearms became more brutal, and Gatling guns started mowing down countless Mexicans. Spaghetti westerns had a fetish about guns hidden in every conceivable place from guitars to coffins. Lee Van Cleef as Col. Mortimer in For A Few Dollars More unrolls his horse saddle blanket and assembles a long-range Buntline Colt (a gun which may never have existed in the Old West). It’s all part of the mystique.

Long-range marksmanship is a key feature of several Westerns. One thinks of Joe Kidd, Quigley Down Under or Valdez is Coming.

Lots of films are about selling guns, Winchester rifles usually, to the Indians. Think of Winchester ’73, The Man from Laramie or even The Paleface. This is considered a most heinous crime, situated somewhere on the scale of human wickedness between cannibalism and matricide, because these guns will be used to kill white men. Horrors.

Pat Garrett & Billy the Kid has a triste homage to the classic showdown when Billy faces off with Alamosa Bill (Jack Elam) in a ritualized duel that neither wants.

Later Westerns glorified in the gunshot and showed much spurting blood. Sam Peckinpah was probably the champion of this. Most recent Westerns care about realism and a film like Dead Man gives us a most accurate and grimly realistic form of gunplay. Revolvers were extremely inaccurate in reality at anything over a few feet. There were men with astonishing marksmanship skills who could hit what they aimed at over considerable distances, Wild Bill Hickok for one. And Wild West Show displays by Annie Oakley and the like were not faked. But for most of the history of the Western movie, gunmanship and the effects of gunshot wounds were laughably badly portrayed.

In several Westerns there is a discussion of the power for good or evil guns have. The otherwise rather weak Randolph Scott oater Canadian Pacific has what could have been (if developed) an interesting discussion on gun control.
Edith: My father was killed, Mr. Andrews, because he tried to use a gun against a man instead of reasoning with him. If he hadn’t worn a gun, he’d still be alive.
Tom: I’m sorry about your father. I’ve learned, though, that in this country if I draw faster, I keep living.

Very similar conversations take place between Amy and Kane in High Noon and Shane and Marian in Shane.

But the commonest view Westerns hold on guns can be seen in the opening screen of Colt .45:


A gun, like any other source of power, is a force for either good or evil, being neither in itself, but dependent upon those who possess it.


Guns, though, are essential to a true Western, like it or lump it.