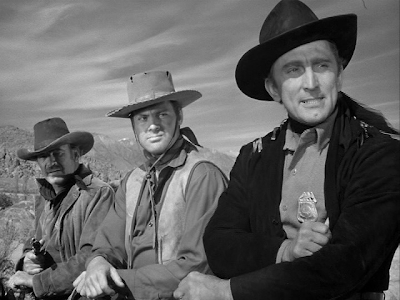 In the 1940s Raoul Walsh moved from the dashing oaters such as Dark Command or They Died With Their Boots On to a smaller, darker kind of Western, that one might think of as a psycho-Western or a Western noir. The most successful of these was the first, in 1947, Pursued, with Robert Mitchum. It’s a fine film. Colorado Territory also (1949) with Joel McCrea. Along The Great Divide continued in that vein and while it does not have the same power (probably because Kirk Douglas was no Mitchum) it still has qualities that make it worth seeing today.

Not that Douglas is bad. It was his first Western and he hadn’t really mastered the art yet. He also did not get on at all well with Walsh. He plays a man driven (always good in Westerns). Not a man driven to revenge but rather one desperate to expiate a tragic sin of his past. The drama, written by Walter Doniger, is tense and quite gripping. US Marshal Douglas saves Walter Brennan (excellent as an amiable rogue) from a lynch mob determined to hang him for the murder of a big rancher’s son and then takes him across the desert for trial, pursued by said ruthless big rancher and crew.

Brennan’s daughter Virginia Mayo has to come along for the love interest. She plays a slightly tomboy type who is full of vim ‘n’ vinegar but she was rather an unconvincing spitfire. I always thought her too posh to do tomboys and saloon gals, although she was good as Colorado in Colorado Territory. Kirk is also accompanied by two deputies, John Agar (so-so, miscast, one of those Western actors who started at the top and worked his way down) and Ray Teal (excellent as always). Some interesting arithmetic takes place as this party of goodies and baddies in a ratio of 3:2 gradually changes. One deputy dies, another turns his coat. They capture the second son of the rancher (nasty James Anderson) until Kirk is outnumbered 1:4. 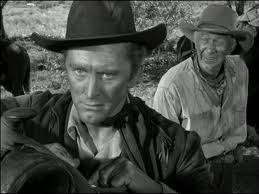 There is the classic ordeal of crossing the desert without water, another stock Western theme – man against nature. There’s some excellent black & white photography by Sid Hickox of the Lone Pine locations (it looks more like New Mexico), especially in the (obligatory) sandstorm. The music by David Buttolph is also quite powerful, suggesting danger and hardship. Sadly, though, part of the plot is that Brennan torments Douglas by endlessly singing a particular song. He of course also torments us, especially because he couldn’t sing worth a damn. It’s no better when Kirk joins in.

Morris Ankrum is good as the fanatical father crazed by his lust for revenge, a real swine. Like most movies directed by Walsh, this one moves along at a good pace (not easy to do when you are recounting a slow trek across a desert in which the characters are reduced to walking). The trial at the end is dispatched briskly in a series of rapid testimonies. It’s a travesty of justice. And there’s the dénouement we kind of expected after a shoot-out in a stable. All a bit predictable but quite well done. 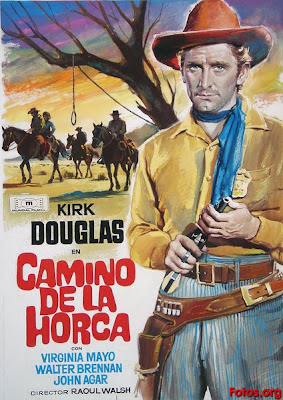 There’s a hint at the ruthless cattle ranchers vs. plucky homesteaders theme but it’s pretty cursory. More interesting and better developed is the notion of law and justice and how they do not necessarily go together.

Not up there in the Parnassus of Westerns, not even at the top of Walsh oaters, Along The Great Divide (heaven knows why it was called that) is still worth a watch. Happy viewing, pards.